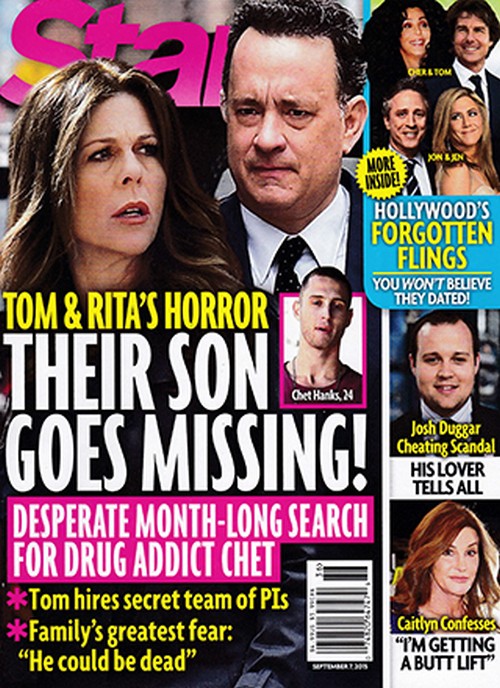 Is Chet Haze missing? Or did Tom Hanks and Rita Wilson finally get their troubled son in to a rehab facility that he desperately needed to go to? Chet Hanks AKA Chet Haze, has definitely made 2015 interesting – his interesting rap songs and drug-fueled social media rants never ceased to amaze us. Obviously, his famous parents Rita and Tom were unimpressed. Now, Chet seems to have fallen off the face of the Earth, and according to this week’s edition of Star Magazine – he has been “missing” since July.

This week’s cover of Star Magazine features a photo of Chet’s parents Tom Hanks and Rita Wilson appearing concerned, and the headline screams “Tom & Rita’s Horror: Their Son Is Missing!” The over goes on to tease, “Desperate Month Long Search For Drug Addict Chet,” apparently Tom Hanks has hired a team of private investigators to find his son – and the family fears that he “may be dead.”

The last time anyone supposedly heard from Chet Haze was on July 23rd when he posted on Instagram, “Getting the f**k out of Dodge for a in… Gonna go get my mind right. I’ll be back!” If Chet Haze is truly “missing,” we’re pretty sure his parents would have filed a missing person’s report with the local police by now. Or we would have seen his face on our milk carton this morning. Tom and Rita don’t seem to unnerved by their son “missing.” So, either he isn’t really missing – and he checked in to get some much needed rehab. Or, Tom Hanks and Rita Wilson are happy to have him out of their hair for a while – and haven’t really put that much effort in to finding him.

What do you guys think is Chet Haze really in trouble and missing? Or did he finally get some help for his drug issues? Let us know what you think in the comments below!