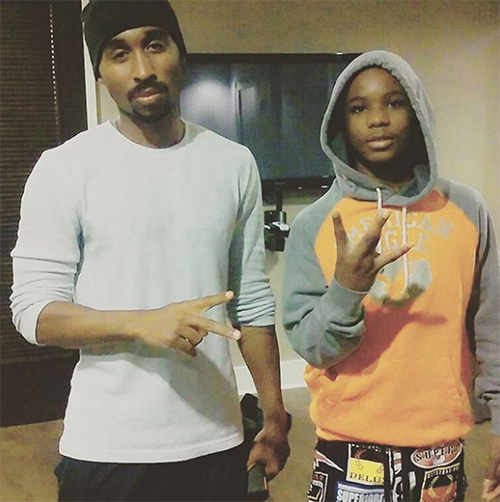 Demetrius Shipp Jr. is all set to star as Tupac Shakur in an upcoming biopic about the rapper’s life. It turns out that Shipp has always resembled Tupac and even his co-workers at Target nicknamed him ‘Pac after the late rapper. The brand new movie star has definitely risen from humble beginnings and it’s really quite surprising that it took this long for Shipp to make a living from looking like Tupac.

TMZ ran into Demetrius Shipp Jr. as he arrived at LAX for the first week of filming and they asked about his uncanny resemblance to Tupac. Shipp opened up in the impromptu interview and revealed that he’s always looked like the legendary rapper. Demetrius divulged that co-workers used to call him “Pac (a nickname often used for Tupac himself) when he worked retail at Target.

The Tupac twin seems pretty down to earth still and answered a lot of questions during the LAX film session. When asked about speculation that Tupac Shakur is alive, Demetrius Shipp Jr. said he doesn’t think those stories are true. The uncanny resemblance between Demetrius and Tupac has many wondering if the actor is actually the hip hop legend come back from the dead. When asked if there is any possibility Tupac is still alive and in hiding, Shipp responded, “Nah, I don’t believe any of that. I don’t buy none of that.” Then again, if Demetrius knew any better, would he tell anyone?

While this may not be the case and Demetrius Shipp Jr. is really his own person, he looks so much like Tupac that it’s like looking at a ghost. Shipp told TMZ that he’s been called ‘Pac since high school and certainly even strangers have gone up to the fledgling actor commented on his appearance.

Tupac fans are excited for the All Eyez On Me biopic about the fallen rapper. With just four weeks of intensive acting classes, we’re hoping Demetrius Tripp Jr.’s famous face and natural talent are enough to convince viewers. The Benny Boom directed movie is very highly anticipated after having a very rough time getting started. Tupac Shakur fans can’t wait to see how well the rapper’s lookalike pulls of playing the role. Are you excited for the Tupac movie?