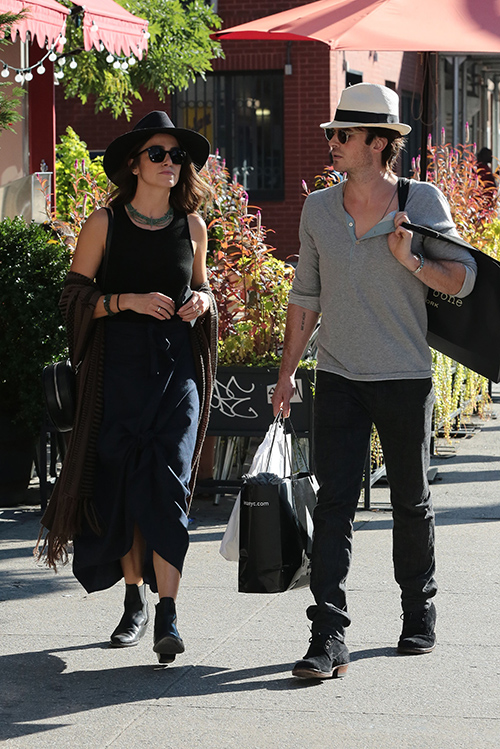 Will Ian Somerhalder follow Nina Dobrev’s lead and quit ‘The Vampire Diaries’ after the series moves to the dreaded Friday time slot? It seems Ian’s character, Damon, can’t carry TVD alone and the show CW show is rumored to be facing cancellation after a dip in ratings.

Nina Dobrev left ‘The Vampire Diaries’ after season 6 citing that she wanted to explore a career in movies. Rumors swirled that Dobrev actually left ‘The Vampire Diaries’ because working with her ex, Ian Somerhalder, was too difficult. Other stories claimed Nikki Reed didn’t want her new husband working with the Bavarian beauty and made working on set uncomfortable. One fact is clear – since Nina’s departure, TVD has been suffering when it comes to ratings and pleasing the show’s fans.

The cast and showrunners are labeling ‘The Vampire Diaries’ season 7 as a “transitional” season, but could it actually be TVD’s last season? After Nina left the supernatural series, ratings have dived and a huge sign ‘The Vampire Diaries’ is facing cancellation came with the news TVD was being moved to the Friday night time slot. It’s essentially the kiss of death for most shows, especially shows with a younger fan base who prefer to go out and party Friday night instead of watching TV.

Ian Somerhalder is undoubtedly worried. As CDL covered, Ian and Nikki Reed are likely working to save Somerhalder’s career post-TVD. Nikki has been pushing Ian to quit the show before it’s cancelled so he can at least claim he left versus being fired. The sad truth is that it appears to be that Ian’s character, Damon, can’t carry the show and Dobrev is needed to make the show’s formula work.

It’s also interesting to note that in early in December, Ian sent out a rather cryptic Tweet to his followers…

“Hi Twitterverse. Been taking a moment to process all that’s going on around me…Have a bunch to say.Talk soon… Love, Ian”