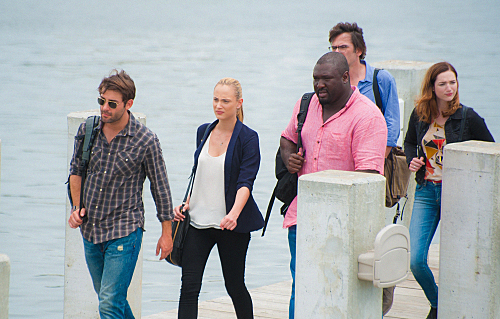 Tonight on CBS Zoo continues with an all new Tuesday August 18, season 1 episode 8 called, “The Cheese Stands Alone,” and we have your weekly recap below! On tonight’s episode, the team discover a terrifying rat infestation when a cargo ship carrying the bloodthirsty rodents washes up off the coast of Massachusetts.

On the last episode, the team traveled to Paris to look for a group of bears that were being studied for migration habits when their trackers mysteriously went offline. There, Chloe reunited with her ex-fiancé, a civil engineer who was helping city officials with the search. Meanwhile, a daring plan was devised to hack into the Reiden-Global mainframe; and Mitch made a shocking discovery about the next evolutionary step of the animals. Did you watch the last episode? If you missed it, we have a full and detailed recap right here for you.

On tonight’s episode as per the CBS synopsis, “the team discover a terrifying rat infestation when a cargo ship carrying the bloodthirsty rodents washes up off the coast of Massachusetts. Meanwhile, Mitch secretly prepares to make a dangerous trade with Reiden-Global to save his terminally ill daughter’s life.”

This is definitely one series that you don’t want to miss. Don’t forget to stay tuned to Celeb Dirty Laundry where we will be live blogging the season 1 of Zoo.

#CBSZoo starts in Paris and Chloe says they need to head to Maine to deal with a rat problem. The rats ate everyone on a cruise ship then swam for shore. They said there was Reiden Global grain from a farm on board. Chloe is told to go, capture a breeding pair of rats and determine if there needs to be containment protocol. In Boston, Jamie tells Mitch she should go through the Reiden docs but he says she should stick with them in case someone is looking at her for Shafer’s death.

Jamie says people are going to think that he cares. She takes off. Mitch makes a call to Clayton and says he’s in town and has the mother cell and they can meet later. The group chats on a ferry and they wonder how the rat population grew so fast. Jackson says maybe the mother cell sped up their gestation. Abe wonders what if all animal populations speeds up and says a swarm of lions or alligators would be even worse. Jackson says they need to warn the people of Pender Island.

Chloe reminds them they have to capture a male and female and Jamie isn’t happy about the rat hunt. Jackson says studies show that rats that taste human blood begin to crave it. That worries them all. Abe asks what else is on his mind. Jackson says they vacationed on the island before his dad went off the deep end. Mitch heads to see Clementine and greets the service dog warmly. Mitch asks if the dog has been acting okay and is ex says he got hit by a car.

Mitch asks if he’s been aggressive at all and she says no. Clem comes down and says hi. His daughter says she doesn’t remember him but Mitch says it’s okay since he remembers her. His ex asks what they’re going to do and Mitch says they’ll improvise. Clem goes to get Henry’s leash. Mitch checks the dog over to be safe. On the island, Jackson points out the sheriff. It’s Becky, a woman he’s known since they were kids. Becky tells Chloe she was his first love when they were 12.

Jackson says they just work together and Chloe says they’re there to talk about the rats. Becky says Billy, the guy who saw them is a known drunk. She says there’s nothing to be concerned about and Jackson says there is. Becky says rats are scared of us and says the coroners think it was a carbon monoxide leak that killed the men then the rats scavenged. Jamie is trying to reach Mitch but he’s not answering and she’s worried. Abe advises patience.

Jackson advises Becky to evacuate the island. He tells her there’s a real danger but Becky says it’s peak tourist season. (It’s like Jaws!) Becky says the Wilson Hotel is the only place anyone has spotted any rats and tells Jackson no more rat talk. Jackson says the hotel is huge and it would be a perfect breeding ground for the rats. They head out. An exterminator is at the Wilson Hotel looking around. He talks on his cell to another guy. He has a flame thrower thing.

He ends the call when he sees a rat. He follows it into another room and hears a noise in the ceiling. He gets a ladder and goes to look in a gnawed out hole in the ceiling tiles. Thousands of rats swarm his head and he goes down screaming in terror. Chloe, Abe, Jamie and Chloe head there and spot the exterminator’s van. Mitch sits at the park with Henry and Clem and he says he has something for her and hands her a piece of paper.

It’s a parking ticket and she asks why it’s so old. He says it’s 10 years old and says he got it the day she was born outside the hospital. He says her mom’s water broke and he was at a duck sanctuary. He says he had to park illegally but he made it on time. He says he saved it and now it’s hers. She laughs and calls it a family heirloom and notices there’s a stain – he says it’s coffee. In New York, a couple is on a first date – they met on a dating service.

He tells her three times his first date has bailed on him. She says she manages hair salons in Queens. Her phone rings and she says she doesn’t need to get it. He likes to hear that. Abe tinkers with the wiring and she says she’s still worried about Mitch. Abe asks what she would do after she takes down Reiden. They get the lights on and the rats start making noise. Jackson says the sound is of them sharpening their teeth. Scary.

Jamie and Abe check the traps. Jackson comes in and says it’s worse than they thought. Abe says they caught a male – they just need a female. Jackson calls Becky and says the Wilson is crawling with rats and there are thousands of them and says they need to evacuate nearby homes. She says she’s on the way and he says to stay away but she’s already off the call. Mitch and Clem mock the sandwiches her mom sent and Clem asks if he has a wife or GF or if he’s met Justin.

He says no to all. She says Justin is awesome but says she doesn’t call him dad or anything. Mitch says okay. He asks how she feels and she says not bad for a dead girl. He says not to call herself that and she says the other kids call her that. They eat their sandwiches in silence. The guy on the date says a colleague of his vanished – he’s talking about Shafer, I think. She asks what he does for a job and he says he settles differences in his business.

They walk in the park and he says the missing guy is special since his son took off for California. They decide to take a carriage ride around the park. The horse is antsy from the start. The elevator opens at the hotel and a pile of rats pours out and comes for the group of four. They hide as the rats swarm but get separated from Chloe. They make small talk in the carriage and the horse runs amok then breaks loose of the carriage. The guy saves his blind date at the last minute.

Mitch brings Clem home half asleep. She says it was a good day and Mitch tucks her into bed and she says he should come around more often and calls him professor. He agrees. Becky shows up to the hotel and the others worry about Chloe. They hear more noises and see that the one male rat that Abe captured had babies in the trap. Abe says no mammals reproduce asexually and Jackson says they’re all male. He says it’s statistically unheard of for a litter to be all one sex.

Chloe startles Becky who was calling for Jackson. She found the dead exterminator. Chloe says they need something better than rat traps. Mitch warns his ex to call him if anything strange happens with the dog and she asks why she would call him about anything. She asks if he’s having a mid-life crisis and says to buy a sports car but don’t think she needs him there. She asks why he called after all this time. Jackson says the rats are thirsty and they wonder if there is a giant rat queens.

Jackson says they need to find them to understand this mutation. Jamie says she wants to find Chloe and Jackson says they can do both. Murphy calls his boss and says Shafer is dead. Murphy sends him video footage of the gang talking to Shafer. They find the queen rat then Chloe shows up with the flame thrower. They tell her to get the queen. She burns them all down. Jackson says with the females dead, the pups won’t survive. Becky asks if there’s more to this.

Jackson says there might be and Becky wishes him luck then says not to wait so long to come back. Jackson apologizes for disappearing and not explaining why but Becky says she knew about his dad. She says everyone knew. Mitch meets with Clayton who hands him the medicine and says it should be more than enough to help his daughter. He explains the dosage and Mitch hands over the mother cell. Then Mitch spots Chloe’s boss in the conference room and they lock eyes.