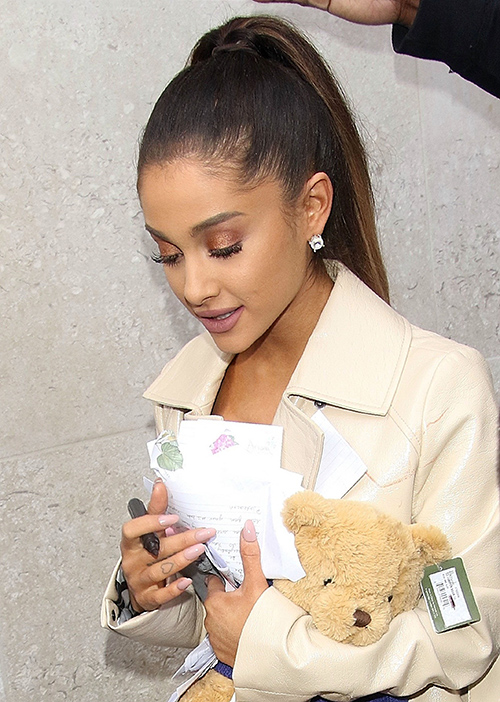 Ariana Grande demands attention, no secret there! But is Ariana completely insecure or just a diva? The singer’s alleged behavior backstage at Saturday Night Live has many wondering which one it is. Why does Ariana need to be carried around rather than walk on her own two feet? When the singer hosted the NBC late night comedy on March 12, she reportedly wanted to be carried off-stage between skits. Ariana even had someone on standby to do the carrying!

An insider divulged to OK! Magazine that Ariana would “leap into the arms of this woman standing by.” This person would then whisk Ariana off to prep for the next sketch. That alone screams diva, don’t you think?

Those that follow Ariana Grande on social media may not think it’s odd or diva-like behavior. Ariana has posted photos of someone carrying her around after a long day of work. It’s nothing new apparently.

The source revealed that Ariana couldn’t stop asking SNL cast members how they thought she was doing in the skits. Was she good enough, funny enough? Allegedly, Ariana approached Saturday Night Live executive producer Lorne Michaels and put her arm around him.

The creator of Saturday Night Live must not have enjoyed this encounter with Ariana very much because the insider divulged that Lorne spoke maybe two words to Ariana and then hurried off.

Just in case the cast and crew, and Lorne, weren’t willing to offer up lots of affection and attention, Ariana dragged her entourage, which included reality television star and YouTube sensation Frankie Grande, along with her. Did Ariana put Frankie Grande in charge of the cheering squad for the evening? There was a lot of “I Love YOU!” shouted from the audience.

Despite the fact that Ariana pulled off some seriously great impressions of Celine Dion, Whitney Houston, and Shakira, she seemed completely insecure with her performance. Is Ariana like this during a concert? Does she need to surround herself with people who keep telling her how wonderful she is and how great she’s doing?

Ariana Grande isn’t the first, and she won’t be the last, singer who craves constant attention and validation. Isn’t that sad? Hopefully Ariana is young enough to realize that she’s good enough to compete with the best in the business.