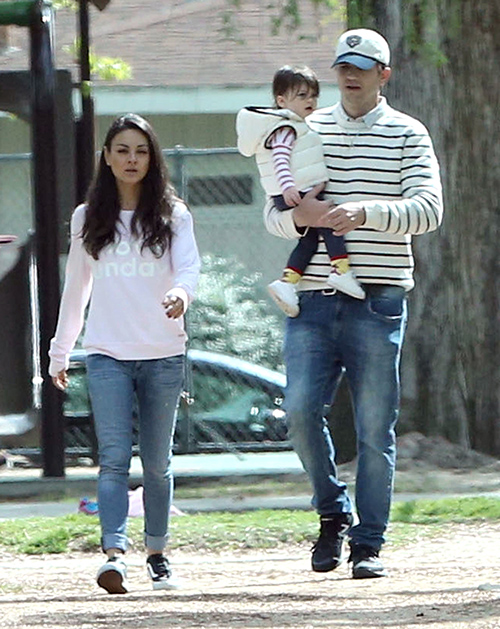 Ashton Kutcher is reportedly worried about his wife Mila Kunis’ relationship with her ex-boyfriend Macaulay Culkin. Long before Ashton and Mila reunited after their time on That 70’s Show, Kunis was dating the troubled actor Macaulay Culkin. Culkin has been surrounded by drug and mental health issue rumors for years – photos of the former child star are constantly popping up on the internet, and we can all agree that he doesn’t look too good!

According to a new report from National Enquirer, Mila Kunis is still in contact with Macaulay, despite her husband Ashton’s disapproval. Ashton is apparently jealous of the amount of time that Mila devotes to Macaulay – because she is “trying to save him.”

An insider dished to National Enquirer that Ashton Kutcher’s jealousy issues are driving a wedge between the couple. The source revealed, “Mila swears she’s devoted to Ashton and their daughter, but also wants to see Mac thriving. She told Ashton to get over himself.”

Mila Kunis and Macaulay Culkin dated for 8 years. They definitely have some history, so we can see why Ashton Kutcher would be a bit insecure about his wife spending so much time with her ex. But, in all seriousness, have you seen Macaulay Culkin lately? Ashton most likely has nothing to worry about. Everyone loves a project, and it sounds like Mila is just determined to “fix” her ex-boyfriend.

On the other hand, Mila is a married woman now and has a daughter (Wyatt Isabell) to focus on. Although cheating on Ashton most likely isn’t even on her radar, her family should be coming first and foremost before her pet project of saving Macaulay.

What do you guys think? Is Ashton being paranoid? Or does he have a valid point? Could their marriage be in jeopardy over Culkin? Share your thoughts in the comments below!