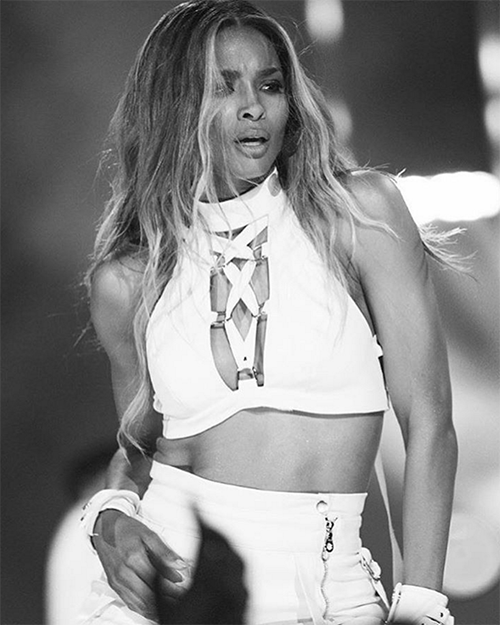 Fame, money, looks, they’ve got it all. Nothing has stopped these sexy divas from making an everlasting impression on the music industry. Here, we take a look at top 5 sexiest female singers in the industry today. We’re sure you’re going to enjoy the list – and if you have opinions, be sure to let us know what you’re thinking!

#5. Ciara: Born in Austin, Texas, Ciara travelled around the world during her childhood, and eventually moved to Atlanta, Georgia where her songwriting skills were first noticed by producer Jazze Pha. She banded with the girl group Hearsay, but the group later disbanded citing differences.

Ciara rightfully deserves the fifth spot in the list of the sexiest female singers thanks to her toned body and strong abs. She is engaged to rapper Future and recently gave birth to her first son. The hot mama became the spokesperson in the new ad campaign for Adidas Originals in March 2010.

#4. Nicole Scherzinger: Born in Honolulu, Hawaii and raised in Louisville, Kentucky, Nicole did not depend on anyone to start her career. The 36-year-old singer shot to fame as the lead singer of the all-girl group, The Pussycat Dolls.

Nicole is fourth on our list of sexiest female singers today. The “Your Love” songstress knows exactly how to flaunt her best qualities without coming across as vulgar or being too proactive. While her beautiful, toned body can be every woman’s envy, it’s enough to fuel any man’s flight of fancy as well.

Since 2007, Scherzinger has an on-off relationship with Formula 1 World Champion Lewis Hamilton. The couple has reportedly split and reunited several times.

Nicole, who once lived with bulimia, said, “I never did drugs, but hurting myself was my addiction. The music is what saved me.”

#3. Rita Ora: The British singer won our hearts with her addictive songs and fresh vibe. She instantly shot to popularity when DJ Fresh’s song “Hot Right Now” was released, making her the artist with the most number-one singles on the UK Singles Chart in 2012.

#2. Rihanna: Rihanna is one pop star who does whatever she want and still manages to remain eternally ‘Unapologetic’. Number 2 on our list of 5 sexiest female singers is none other than Rihanna.

RiRi started as an adorable, innocent girly-girl but eventually evolved into one of the hottest female singers in the industry. The popular Barbados singer is known for her much-debated outfit and hairstyle choices that keep her fans wondering what she will come up with next.

Rihanna loves experimenting with her hair and has tried every hair colour from feisty red to sexy blonde. She most recently donned the 216.000 Swarovski crystals naked-dress at the CFDA Fashion Awards, where she was awarded the Fashion Icon Award.Well deserved, we say.

#1. Beyonce: Who else but Queen B makes it to our no. 1 spot on the sexiest female singers list. Beyoncé is, without-a-doubt, one of the best female singers in the industry, but she is one of the hottest as well. Surprisingly, Beyonce continues to look equally hot even after she had a baby. Makes us wonder how she does it?

This Houston, Texas-born hot mama is married to Jay-Z, a popular rapper and successful entrepreneur/ investor. They welcomed their daughter, Blue Ivy, on January 7, 2012. The couple has just started the ‘On the Run’ tour, reportedly estimated as the second most successful in the world.

Queen Bey never fails to surprise her fans with her interesting outfit choices and different hairstyle. Needless to say, she looks hot every time.

“I’m over being a pop star. I don’t wanna be a hot girl. I wanna be iconic.” Beyonce is an inspiration for many young girls and women today, and clearly she works really hard for that.