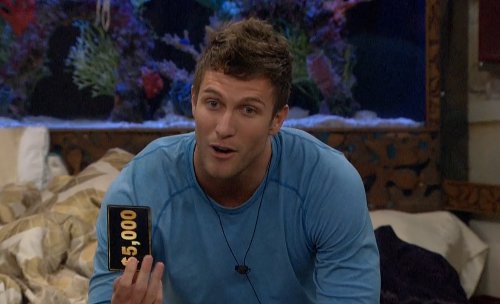 New Big Brother 18 spoilers from the Live Feeds reveal that overnight, there was a bully rampaging, a murder, and Corey awarded the $5k BB Bribe to an ally to seal a Final Four deal. Here’s a look at what went down in the house starting with the bribe.

Corey and Nicole debated intensely about how to use the bribe and Corey revealed that Big Brother was pressuring him in the Diary Room not to let the #BBBribe go to waste. He offered it to Nicole but she thought it was bad karma for her to take the cash.

They then debated using it to get someone to drop from the HoH comp but seemed unlikely. In the end, Corey decided to offer it to Victor as a bribe for him to vote to evict Michelle. The showmance pair sat down with Victor and Paul to make the offer. 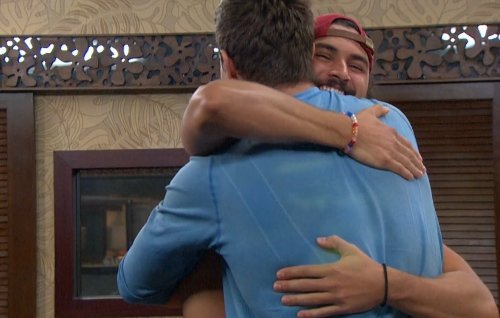 Victor was thrilled that Corey offered him the bribe and Victor accepted so Meech is going out (as we knew). Victor was moved to tears and grateful. Paul was also happy and they felt like it sealed the “Final Four” ride or die alliance – cue group hug.

All four agreed that if anyone asked about the bribe, Corey would say he let it go to waste. With that done, talk evolved into the Week 11 Head of Household comp expectations and the guys planning to win and target Natalie and James. 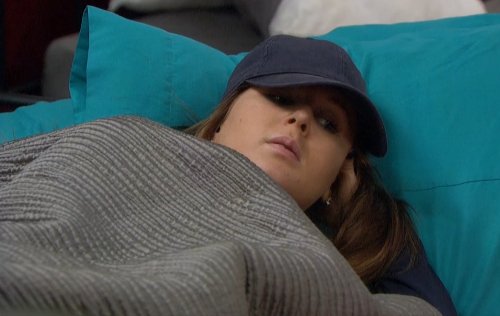 Michelle seems to have given up on her BB18 game – or she’s genuinely convinced she can’t be evicted – or both. She continued to refuse to campaign and so there has been, at this point, no communication between Michelle and Nicole about how the LIVE eviction vote will go down tonight.

Michelle has fished a little with Paul on the subject but he played dumb. Michelle did advise Natalie and James that if they find out she’s being evicted, they should vote with the house to stay out of trouble and promised them it wouldn’t cost her jury vote. She also did some light packing just in case.

Natalie, James and Meech all noted that Paul seems more upbeat. Shouldn’t that be a warning sign to them that he’s not going? Some of the HGs are still concerned about a Double Eviction – which is not happening – and James even started packing in case he was targeted. 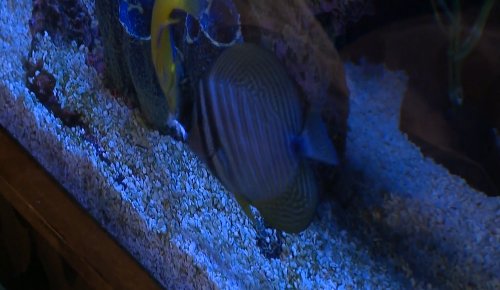 And now for the murder…

At about 10:30 pm, Nicole found a bloody dead body in the HoH room! Nicole noticed that one of the fish had been killed in the HoH tank. As if we don’t spend enough time seeing fish when the feeds are down, we got to watch Nicole watching the fish. Then Corey joined her and they watched the fish together.

They stared at the dismembered fish corpse and Nicole and Corey discussed that the striped one is very aggressive and they’re always fighting. Nicole wants to know (she seriously said this) “Why are they so mad at each other?” Corey told her that the fish can’t hear her but she carried on.

Nicole singled out one she called the instigator and says he does it all the time and added “it makes me angry.” Wow. So it seems like Nicole solved the murder – it’s the big striped fish she called an a-hole. If there’s anything worse than watching fish, it’s watching Nicole and Corey watch fish. 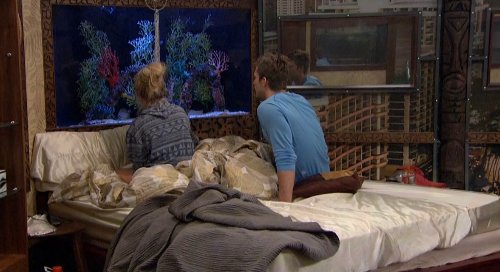 A gripping night in the BB18 house…

The fish show went on in the HoH room for a long time with Nicole calling certain fish bullies and Corey laughing out loud at her. Nicole proved her brilliance when she wanted to know if a particular fish was female by asking Corey, “Are fish girls and boys?”

That’s Wednesday night in the BB18 house folks! A murder, a bribe, and Nicole demonstrating her ignorance of the way nature works – circle of life – eat or be eaten. She’s a nurse – doesn’t that require some science classes? Kind of scary…

Heading into tonight’s LIVE eviction it seems like little will change and Meech is destined for Week 10 eviction with Michelle and Paul still on the BB18 Chopping Block.

And new BB18 spoilers tease that tonight’s HoH comp will be the egg and chicken wire challenge. Be sure to tune in to CDL tonight for a recap of the Big Brother 18 LIVE eviction episode.