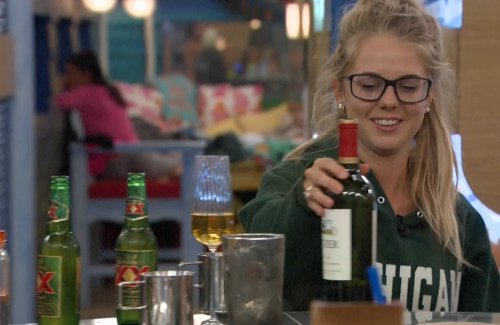 Recent Big Brother 18 spoilers from the Live Feeds this weekend show liquor flowing and a line being drawn with Paul and Paulie on opposing sides going into the PoV ceremony on Monday and the LIVE eviction on Thursday. Da’Vonne seems a lock for the block, but may not go home after all. Here’s a look at what’s been happening.

Friday’s PoV comp left Paulie with the Power of Veto medallion around his neck and a plan to backdoor Da’Vonne after he pulls himself off the chopping block. Paul was going along with Paulie’s pressure to renom Day, but as Saturday dragged on and liquor was supplied to the HGs, it became clear that there are two distinct factions heading into the eviction vote this week.

As soon as the PoV comp was over, talk began. James wants to keep Da’Vonne in the game while Paulie wants her out. Paul has been talking about going along with Paulie’s plan to send out Day, but secretly wants Bridgette to go home instead. Paulie thinks Bridgette can be used to help the guys eliminate the girls since she’s lost her only ally (Frank) and is available to be their tool. 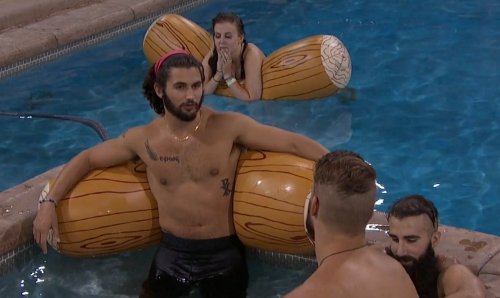 But then the liquor was delivered…

Nicole got blitzed and somersaulted out of the hammock. For those that missed it, Michelle staged a re-enactment of the fail. Corey tried to nurse Nicole through her drunkenness because he was worried if she started tossing her cookies, the powers that be at BB18 would be annoyed and they might not get hooch ever again.

Corey rubbed her back, fed her a sandwich and water, and sent her off to bed to sleep off the drunk. Paul, however, remained wide awake, seemingly intoxicated, and growing demanding and offensive as Saturday night wore on. Paul asked the women around to let him “bone” them and then demanded everyone come swim with him.

Since Paul is HoH, most caved and eventually came to lounge in the pool and hot tub with him. Da’Vonne, though, was feeling safe (although she’s not) and said she didn’t want her hair wet and went to clean the kitchen instead. Zakiyah seemed a bit tipsy as well and kept singing Lorde’s “Royals” in the kitchen and was subjected to repeated demands by Big Brother to stop it. 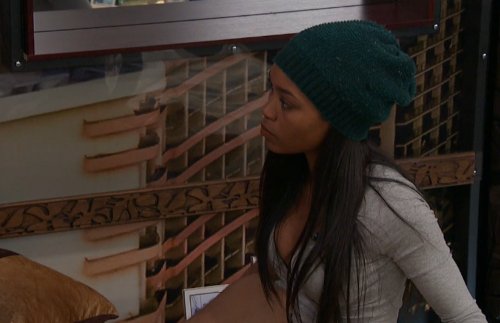 The house begins to fracture

Close to midnight, drunken Paul lets Zakiyah in on his backdoor of the backdoor plan – he will cave to Paulie’s demand that he renom Da’Vonne but then wants Bridgette to go home anyway that way Paulie can’t say he backed out on the promise to renom Day but will still get the end result that he wants – Bridgette going home. Bridgette was MIA for most of the Saturday night antics.

Zakiyah confirmed to Paul that she also wanted Bridgette gone even though her showmance pal Paulie wants Day outpau. Zakiyah spent hours rubbing all over Paulie who tried to leave the room and seemed grateful when Paul demanded that he come swim because that meant he could get out of the HoH bed where Z was uncomfortably close and persistent.

Paulie and Victor talked about the all-girls alliance that Tiffany warned them about and how they could leverage Bridgette to get blood on her hands taking out the girls that picked on her so they could be five guys strong going into the final weeks of BB18. Meanwhile, Big Brother 18 spoilers from the Live Feeds show Paul lying to Da’Vonne and telling her Paulie may not use the PoV at all and could stay on the block beside Bridgette going into the eviction vote. 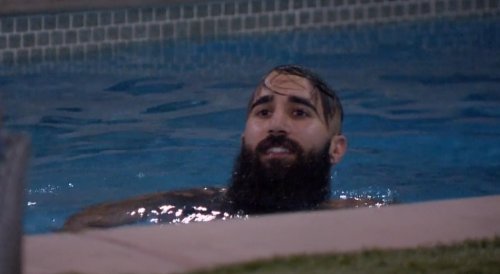 Paulie and Victor go back to Paul again and remind him that Bridgette has no allies and is not a threat to anyone’s game. They’re not wrong. Even if she won HoH, she would likely target the women that have been bullying her all season long in the BB18 house. Paul seems uncertain and then Paulie tries to win Paul over by telling him that Zakiyah and Michelle plan to nominate Paul if they win HoH. Paul is floored – he thought his “friendship” was protecting him.

Da’Vonne goes to James with the “news” that the PoV might not be used and James lets her talk since he knows that’s absolutely not what is going to happen. Michelle and Zakiyah talk about rallying votes to save Day if she ends up beside Bridgette on the chopping block. There are eight votes in play and with two girls on the block that leaves Nicole, Zakiyah, Michelle, and Natalie that could vote to evict Bridgette but they need one guy with them.

With James now waffling to keep Day, he could be the vote they need. If the vote doesn’t go the way Paulie wants, it may get ugly next week, particularly if he wins HoH again. Either way, the women’s numbers will be down by one this week and that will shake up the game. Paul’s drunken antics have rubbed people the wrong way and although he wasn’t on the radar for a nom, he’s irritated so many and if he also betrays Paulie, his head could end up in a noose.

What do you think BB18 fans? Will Paulie go into the LIVE eviction confident he can take out Da’Vonne but then end up with his blindside plan blindsiding him instead? Who do you want to go home, Day or Bridgette? Do you think Paul’s sloppy behavior could land him on the chopping block next week?

Share your comments below and check back with CDL often for the latest Big Brother 18 spoilers and news and come back for a LIVE recap of tonight’s BB18 episode.