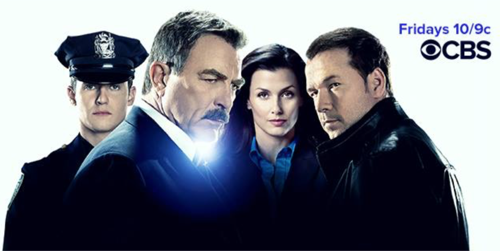 Tonight on CBS their hit drama starring Tom Selleck Blue Bloods airs with an all-new Friday, September 30, 2016, episode and we have your Blue Bloods recap below.  On tonight’s Blue Blood Season 7 episode 2, Erin assists Anthony with a personal case; and Frank’s (Tom Selleck) actions are questioned when he reprimands a disrespectful police officer.

Did you watch last week’s Blue Blood premiere where Danny’s (Donnie Wahlberg) world was rocked when Robert Lewis (Michael Imperioli) in the Attorney General’s office obtained new evidence against him in the self-defense shooting case of serial killer Thomas Wilder?  If you missed it we have a full and detailed Blue Blood recap, right here!

On tonight’s Blue Bloods season 7 episode 2 as per the CBS synopsis, “Danny and Baez investigate the death of an elderly woman who was shot in her home by a stray bullet. Also, Frank faces ridicule from his department when he disciplines a disrespectful cop, and Erin steps in to help her detective, Anthony, find a legal solution to a case that’s personal to him.

Frank was apparently driving to an important occasion when he spotted one of his officers actually breaking the law. The patrol officer he had seen had forgotten that it was illegal to litter and that it was against regulations to be both smoking and texting on the job. However, Frank felt that he should talk to the officer and had surprisingly been met with resistance when he tried to tell the young man not to throw his cigarette bud on the ground like that though what was a small thing turned into something bigger when the officer chose to become impertinent. He didn’t think he should do sanitation’s job for them so he also didn’t think he should pick up his cigarette. So Frank had to pull rank just to get the young man to follow orders by cleaning up after himself.

But Officer Clark hadn’t just left things at that. He had picked up his cigarette bud and later he had created a caricature of Frank that was distributed throughout the precincts. So eventually word got around and both of Frank’s sons had sent him the caricature that they had thought was funny. Frank unfortunately had had another word for it. Frank had thought the picture was disrespectful and he had later been surprised when his own men told him to not to rush into anything though his people had explained themselves. They told Frank that Officer Clark was connected. Clark had a father, uncle, and several other family members on the force. And they were all high up in the hierarchy.

So Frank’s people had wanted him to walk away from this one yet he couldn’t and instead he chose to turn the situation into something worse like an incident. Frank had created an incident when he decided to go down to Officer Clark’s precinct and hand out other caricatures depicting the police. Though Frank had said that those pictures had been created by the press while the one of him had been different so Frank had wanted to show that and he had wanted to talk to the officer again. Frank had heard that Officer Clark had put in his transfer papers and he hadn’t wanted to know why. And so Clark had put his mind at ease because he said that the incident with Frank hadn’t been why he wanted to transfer to Nassau County.

Clark had said that he had put in his papers a while ago and that he had only gotten the ok about a year ago. Yet, Frank had realized and had commented that a year was a pretty long time to sit on a decision. So it did hit Frank that his little spat with the officer was why the young man had wanted to transfer away from his district, but he had refused to feel apologetic and he wouldn’t back down even when his people tried to reason him. They had said that it didn’t look good and that word of it would be bad PR so Frank had heard them and then he had chosen to ignored their advice. And so there was truly only one person that could get Frank to feel bad about what he did with Officer Clark and that was his father.

Henry Reagan usually had nuggets of wisdom and so when he wasn’t trying to help his granddaughter Erin then he was reminding his son about how things were in the past. So one of the things that made Frank reconsider what he had did was the fact that Henry said Clark reminded him of a younger Frank. Henry said that Frank had also been a young man with a chip on his shoulder because his father had been a big name in the Police Department and he had just been a lippy kid that graduated at the bottom of his class. But there Frank had corrected him. Frank had said that he had been a little bit higher up than that though he had gotten his father’s point.

So Frank had eaten some crow when he went to go find Officer Clark and admitted they were on even footing now what with him writing up Clark and Clark creating that picture. However, Frank had also mentioned that he had heard good things about Clark and so he didn’t think that a little bit of shade shouldn’t be enough to deter Clark from staying on. And so Clark eventually did what he should have from the start, he had paid proper respect to the commissioner by saluted him as the commissioner left the building though there was still one other problem with a different officer. Anthony who works closely with the District Attorney’s office had gotten clocked trying to rough someone up.

Anthony had apparently found out that some punk around the neighborhood had depleted his mother of all her lifesavings so he had gotten throwing the guy against the wall. Yet, someone called some patrol officers that were nearby and they had taken Anthony down to their precinct. So Anthony had been lucky that con artist hadn’t wanted to press charges however Anthony still wanted justice for his mother and Erin had promised to help him. Erin had said that they could set up a sting operation and that way they could catch the fraud in the act. And so she had asked her grandfather to act like someone with memory lapses.

Anthony’s mother had Alzheimer’s and so that’s how she was scammed. She had simply written checks to Franky for one thing or another yet she hadn’t remembered half of what she did. Though she did remember that she had been dealing with Franky and so that’s how Anthony and Erin knew which man they should lure into a trap. So everything had been set in motion with Henry and the plan would have worked if Henry hadn’t run into a friend. This friend had gone up to Henry when he had been with Franky and he had acknowledged Henry as a cop. And so the plan fell apart after that.

But Erin had told Anthony that little Franky was about to make another mistake soon and all they had to do was wait. So Henry had decided to help out in the meantime by writing Anthony’s mother a check in order for her to get by and that had been enough to assure Anthony that the Reagans hadn’t forgotten him and that they did care. Their hands were simply tied at the moment and eventually they were going to catch their guy. And so what Anthony needed to do was wait and not wait outside of Franky’s house.

So Henry and Erin weren’t able to catch their bad guy tonight, but Danny was able to put away a major drug dealer that resided in the heart of gang territory. Danny had apparently run into a few of problems as well because no one had wanted to come forward and admit who accidentally shot an elderly woman in her home. However, Danny had learned something by having a stupid teenager of his own and so he had found out who had posted a video of the shooting that night by looking online. And low and behold he was able to get proof that the only female drug dealer in the area had been the one to pull the trigger.

And so maybe Danny might go easy on his son Jack for posting a video of himself drinking seeing as that bit of stupidity allowed him to close his case.