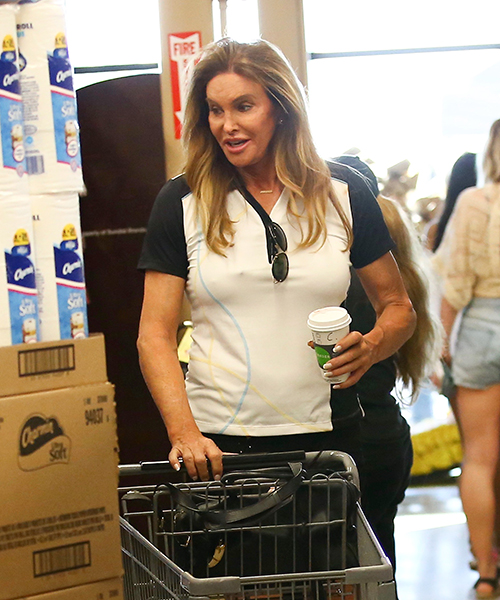 Caitlyn Jenner’s bizarre behavior is definitely a real cause for concern. The former Olympian and reality television star was spotted by the paparazzi leaving Vintage Grocers market in Malibu, California on Labor Day by herself. Despite having a cartful of supplies, Caitlyn Jenner left the store without a bag.

Caitlyn Jenner has gone from media darling to near celebrity obscurity in less than one year. Caitlyn Jenner’s transgender debut shocked the entertainment world when she made the cover of Vanity Fair magazine last year but has since struggled to make a name for herself with her new identity.

Her reality television show, ‘I Am Cait,’ has failed to bring in an audience while her relationships with the Kardashians and particularly her stepdaughters Kim Kardashian, Kourtney Kardashian, and Khloe Kardashian have been undeniably strained and distant. Caitlyn Jenner has no one she can truly count on for support in her life, especially when it comes to her family, and it’s clear that she is in desperate need of some help.

Of course, no one knows why Caitlyn Jenner left the Vintage Grocery store empty handed despite spending plenty of time shopping inside or why she was there in the first place. Either way, Caitlyn Jenner’s bizarre behavior is yet another indication that she’s struggling with the fact that she is no longer the A-list reality television star she used to be under her former identity, Bruce Jenner, on ‘Keeping Up With The Kardashians.’ Television producers and magazine editors are no longer knocking on her door or calling her for exclusives or offering to work with her.

Instead, Caitlyn Jenner has nothing more to look forward to, especially when it comes to the celebrity world. The only option for her at this point is to call her ex-wife Kris Jenner in hopes that she will take her back. Of course, Caitlyn Jenner doesn’t want to be married to Kris Jenner again, but instead work with her on ‘Keeping Up With The Kardashians’ or other possible projects before her name is long forgotten by the media.