Dancing With The Stars Mark Ballas’ Back Injury Update: Paige VanZant Dances With Alan Bernsten For HOW Long? 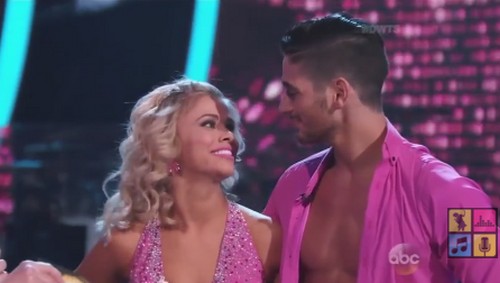 Mark Ballas spoke out about his recent injury, which sidelined him, after he slipped a disc in his back during rehearsal Monday afternoon. Ballas dished to E! News, “The doctor seems to be optimistic, so I’m feeling good about it. I just don’t know how quickly. No time-frame yet…but I don’t want to let her down. I want to be there with her, she’s fantastic.”

Despite Mark’s back injury, the show had to go on, so DWTS Troupe member and ‘So You Think You Can Dance’ alum Alan Bersten took Ballas’ place and performed with Paige VanZant during the live competition.

Despite the fact that Paige and Alan only had a few hours to rehearse together – and Alan had to learn the dance from scratch, they wowed the judged and received one of the highest scores of the night, 24/30. Mark Ballas might want to get cleared sooner rather than later by the DWTS medical team, we can only imagine how well Bersten would do if he had a whole week to rehearse a dance.

Paige VanZant, a female UFC fighter, has emerged as a front runner in Season 22 (of course years of dance classes as a child definitely are helping), and the fact that she can swap partners at the last minute and still do well only solidifies the fact that she could easily take the 2016 Mirror Ball Trophy Award.

SO DWTS fans, how long do you think Mark Ballas will be out of the competition? Can Paige VanZant still win without him? Let us know what you think in the comments below and don’t forget to check CDL for all of your Dancing With The Stars 2016 spoilers and news!