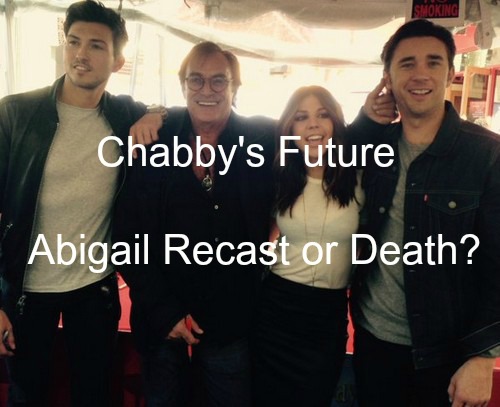 “Days of Our Lives” spoilers tease that big changes are coming for the popular “Chabby” pairing. Chad (Billy Flynn) will soon have to lose his love—at least the current version. Kate Mansi is leaving the role of Abigail Deveraux and has already filmed her last scenes. Due to the show’s taping schedule, Mansi will be shown on air through May and possibly some of June.

Needless to say, “Chabby” fans are incredibly nervous right now about the future of their favorite couple. Serial Scoop revealed the departure news through a series of blind items before confirming that Mansi was done at “Days of Our Lives.”

In those posts, they made it clear that it was Mansi’s decision to leave and this departure was a major blow to the writing team.

It appears Abigail will remain on front-burner status until the sands run out of her hourglass. Nevertheless, everyone pretty much knew this was coming. Mansi has supposedly been inching toward the door for a while now. That means the producers have probably had plenty of time to consider their options.

First of all, they could recast the role. Soap watchers generally accept recasts as an inevitable part of any daytime drama, but they’re hard to pull off. The fact that Abigail is involved in a well-liked pairing makes it even trickier. DOOL viewers won’t accept just anyone; the new actress would need to be a good fit. Mansi is going to be a tough act to follow.

There was a recent casting call for a character named “Val” and it could’ve been a disguised Abigail recast. It’s possible that “Days” wanted to see what was out there. If they didn’t find the next Abigail, they could always hire the actress they liked best as a brand-new character.

It would leave us Abigail-less, but that might not be such a bad thing. They may choose to write Abigail out for an extended period, which would leave it open for Mansi’s potential return. In that case, “Days of Our Lives” could decide to get creative with an exit storyline.

DOOL spoilers indicate that Ben (Robert Scott Wilson) will be popping up in some form down the road. We also know that Matthew Ashford will reprise his role as Jack for a five-episode arc. Ashford’s airdates line up exactly with Abigail’s on-air departure timeframe.

That has to be significant. Could Abigail be headed for a mental breakdown? It sure sounds like a few crazy visions are in Abby’s future.

Perhaps everything Abigail has been through will finally catch up with her. Abby might start hallucinating about Ben and her dead dad. Maybe ghostly Jack will urge Abigail to seek help at mental health facility.

Of course, we should mention the possibility that Jack could be guiding his daughter into the light. However, the show has invested a lot of time and energy into “Chabby.” It’s difficult to believe they’d just throw it all away by killing Abigail off.

DOOL will likely recast at some point if Mansi is gone for good. The question is: when will that recast come on the scene? It might be immediately or it could be many months from now. It seems we’ll just have to keep watching and waiting for updates on the role.

We’ll let you know if we hear any details about Abigail’s upcoming storyline or Mansi’s potential replacement.

So “Days” fans, what do you think about Kate Mansi leaving the role of Abigail? Will you miss Mansi’s version? Should the show recast or just write Abigail out? Voice your opinion in the comments below and don’t forget to check CDL often for the latest “Days of Our Lives” spoilers, updates and news.