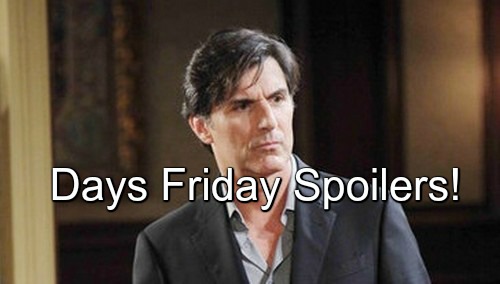 “Days of Our Lives” spoilers for tomorrow’s episode, Friday, March 25, tease that Deimos (Vincent Irizarry) will approach Victor (John Aniston) with a plan for peace. He’ll suggest that they should just put their feud to rest and move on.

Of course, we all know this is probably just another one of Deimos’ schemes. Victor will naturally be suspicious about Deimos’ sudden turnaround.

There’s a good chance Victor will throw Deimos right out of his house. It wouldn’t matter if Victor agreed to this peace treaty anyway. Deimos has several plots in motion and some of them can’t be stopped.

Days of Our Lives spoilers readers knows that Maggie (Suzanne Rogers) is already experiencing symptoms from the hardcore drugs Deimos placed in her pill bottle. During next week’s episodes on DOOL the situation will take a dangerous turn.

In the meantime, “Days” spoilers say Maggie will try to get to know her daughter. Summer (Marie Wilson) was devastated by Maggie’s reaction to the news that she was her child. However, Maggie will explain that she was just caught off guard. She was drugged during the delivery and has no memory of giving birth.

Summer will be stunned to learn that Maggie thought her baby was stillborn. She’ll realize that Maggie didn’t turn her back on her deliberately. This conversation could go a long way toward bringing these two women closer.

Unfortunately, DOOL spoilers indicate that Victor will continue to have doubts about Summer. He’ll be determined to figure out Summer’s true intentions.

Victor recently ordered a full background check on Summer. Could Victor get updates on some of Summer’s previous con jobs? If so, it should call her current claims into question. Nevertheless, the DNA test seems to prove that Summer is Maggie’s daughter.

Then again, does “proof” really mean anything in Salem? It’s rare to get legit DNA results in this town.

In an interview with Soapcentral.com, Jordi Vilasuso (Dario) hinted that he had scenes coming up with Vincent Irizarry. What could bring them into each other’s orbit? Has Dario been working for Deimos behind the scenes? It sounds plausible. “Days of Our Lives” appears to be setting up Dario as a bit of a bad boy.

Dario is just a little too involved in Summer’s business. There has to be an ulterior motive in play. Dario could be Deimos’ right-hand man in an elaborate scheme to cause distress for Maggie and Brady (Eric Martsolf).

Maybe Summer is supposed to hurt Victor in his wallet as well. Dario has been pushing Summer to get a piece of the Kiriakis fortune. Stick with “Days of Our Lives” to see if Summer will listen to Dario’s shady advice.

So “Days” fans, what do you think about the news that Deimos will try to make peace with Victor? Will Victor tell Deimos where to shove his olive branch? Is Summer going to cause trouble? Will Dario be revealed as Deimos’ accomplice?