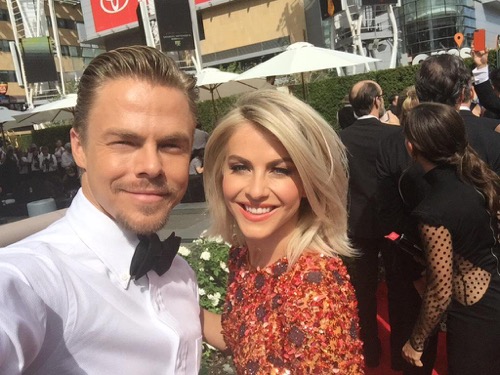 ‘Dancing with the Stars’ spoilers for season 23 reveal that Derek Hough is returning as a ‘DWTS’ pro and Julianne Hough will return as a judge. The entire line-up of celebrities and their pro partners won’t be officially announced until Tuesday, August 30 on ‘Good Morning America.’

E! News got the inside scoop that the Hough siblings will be back for ‘Dancing with the Stars’ season 23. The last time ‘DWTS’ fans saw Derek Hough take home his sixth mirror ball trophy, winning season 21 with partner Bindi Irwin.

Though Julianne Hough has been one of the pros the dancer, actress and singer will sit out the dancing part for ‘Dancing with the Stars’ season 23. Rather, Julianne will sit in a judge’s chair offering advice to the stars as they show off their skills beginning Monday, September 12 on ABC.

Though the new cast and their professional dancing partners will not be officially confirmed until August 30, reports speculate that the ‘DWTS’ season 23 cast will include music mogul Kenneth ‘Babyface’ Edmonds. Other celebrities thought to have been asked to dance the weeks away during ‘Dancing with the Stars’ season 23 include VH1 talk show host Amber Rose, and Terre Jole from the Lifetime reality show Little Women: LA,’

‘Dancing with the Stars’ season 23 spoilers speculated that Olympic gymnast hero Simone Biles was asked by ABC to join DTWS 23. However, Biles issued a statement saying that she while joining the cast would have been great, there is a three-month long tour following the Summer Olympics. The multiple gold and bronze medal winner just isn’t sure she would have the time to commit to the show.

Other ‘Dancing with the Stars’ season 23 casting spoilers include speculation that Bachelorette 2016 JoJo Fletcher may have been tapped by ABC as a star dancer. ‘The Real Housewives of New Jersey’ star Teresa Giudice and former President Bill Clinton’s names have also been discussed as possible dancing stars.

Disgraced Olympic swimmer Ryan Lochte may still be in consideration. However, since the scandal over Lochte fake robbery report at the Summer Olympics in Rio, there has been talk that fellow Olympian and longtime rival Michael Phelps has been asked instead.

What do you think about Derek Hough’s return to ‘Dancing with the Stars’ as a professional dancer? How about Julianne Hough returning as a judge? Can Julianne be objective when it comes to her brother and his season 23 ‘DWTS’ partner?

Dancing With The Stars Fan Page