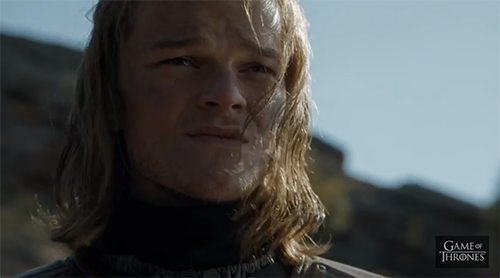 “Game of Thrones” spoilers for Season 6 Episode 3 “Oathbreaker” tease that we’ll see whether Jon Snow came back right in the head, how Arya deals with her second chance to be a nameless assassin, and what Ramsay is up to now that he promoted himself to the head of the Bolton clan.

First, now that Jon Snow (Kit Harington) is back from the dead, the Night’s Watch guys who betrayed him will be soiling themselves in fear while the wildlings think Jon is some sort of God, according to Tormund Giantsbane (Kristofer Hivju).

Clearly, we don’t know what or who Jon will be now that he’s risen. In the GoT books, Lady Stoneheart (aka undead Catelyn Stark) came back a revenge-driven zombie killing machine but Beric Dondarrion (Richard Dormer) was resurrected and he’s semi-normal.

Does the episode title Oathbreaker refer to those led by Alliser Thorne (Owen Teale) that turned on Lord Commander Jon Snow? Certainly Jon has to address their actions and, since Jon died, technically he fulfilled his vows to serve until death – so it seems like what he does now is totally up to him.

Arya Stark (Maisie Williams) is back at the House of Black and White and Jaqen H’Ghar (Tom Wlaschiha) tells her when she’s no one she’ll truly have no one to fear. Arya is still blind but will finally master stick fighting and kicks the ass of the chick who’s been tormenting her.

With Roose Bolton (Michael McElhatton) dead, and no one mourns the violent end of the architect of the red wedding, we wonder what Ramsay Bolton (Iwan Rheon) will get up to as the new Lord of the Dreadfort. Ramsay heads to Winterfell and takes some callers.

One visitor comes with a gift for him – will it be pleasant? Also, how long before Jon comes home to Winterfell? Now that Jon Snow is alive and Sansa is on the run and headed his way, I think we can all agree that we hope bastard Bolton will be direwolf chow soon. Over in the Dothraki Sea, Daenerys Targaryen is forcibly escorted to Vaes Dothrak to join the Dosh Khaleen – wise widows of the Khalasar.

Seems like it’s time for Drogon to swoop down and get Daenerys out of early retirement. Over in Westeros, it’s time to fight dirty and Cersei Lannister (Lena Headley) is warming back up to intrigue and wants to make their enemies pay.

Cersei wants to know who’s plotting against the Lannisters aside from the High Sparrow (Jonathan Pryce). Cersei’s undead Franken-Gregor is loyally at her side ready to do her deadly bidding, as is Jaime Lannister (Nikolaj Coster-Waldau). All hell is about to break loose in King’s Landing.

Bran Stark (Isaac H Wright) is on another vision quest and watches his father, a young Ned Stark, confronting some Targaryens. We hope this is the tale of how Ned went to rescue his sister Lyanna Stark from Rhaegar Targaryen.

“Game of Thrones” just showed us Lyanna Stark out of the blue in another of Bran’s walks through time and there had to be a reason. With Jon Snow reborn, might we finally get a glimpse at his origin story? Will Ned find Lyanna pregnant or having just given birth?

If Jon Snow is Lyanna’s son, then that explains why Ned staunchly refused to kick the kid out of Winterfell despite Catelyn’s non-stop nattering about the kid. Let’s hope that whatever Bran sees on his third eye journey it’s important to the fate of the realm as we know it.

Be sure to tune in to CDL on Sunday May 8 for a live recap of “Game of Thrones” Season 6 Episode 3 Oathbreaker and check back here for more GoT spoilers.