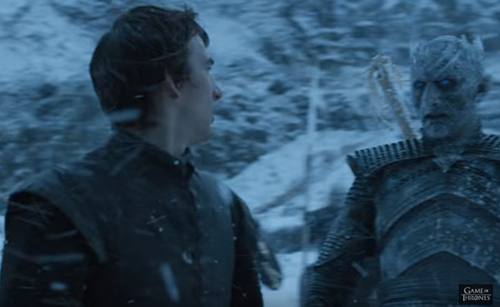 ‘Game of Thrones’ Season 6 Episode 5 spoilers for ‘The Door’ reveal that we’ll see an awkward reunion, witness visions of a terrible fate to come, meet another magic priestess, and watch Arya get back to the business of killing in Braavos. Here’s what to expect.

As we hit the halfway point of the season, several stories pick up momentum. Petyr Baelish, aka Littlefinger (Aiden Gillen), reunites with Sansa Stark (Sophie Turner). There reunion is less warm than he expected – downright chilly, in fact.

The key point Sansa wants to know is if Littlefinger knew what a raping murderous horror that he was giving her to when he endorsed her marriage to the awful Ramsay Bolton (Iwan Rheon). Brienne of Tarth (Gwendolyn Christie) menaces at Sansa’s side while they await this answer.

As GoT fans know, Littlefinger has a way creepy crush on Sansa, so it’s doubtful he would have handed her to a known madman. But surely he had heard a thing or two about Ramsay’s reputation, right? Look for Petyr to exercise his slimy charm to defuse things.

What will help is that he got mama’s boy Robin Arryn (Lino Facioli) to agree to send the Knights of the Veil to fight in the war for Winterfell. Sansa may have to get past her suspicions to regain the family castle. Jon Snow (Kit Harrington) will also distrust Littlefinger.

Brienne heads out on a mission. We’re not sure where she’s going ,but some GoT Season 6 spoilers place her at Riverrun at some point this season – along with Jaime Lannister (Nikolaj Coster-Waldau). But before he can get there, he’s got to deal with the High Sparrow…

Across the Narrow Sea in Braavos, Arya Stark (Maisie Williams) has her eyes back and Jaqen H’ghar (Tom Wlaschiha) reminds her that death comes for the decent and the wicked alike, then he offers her a small object – is it her new assignment?

Over in Meereen, Tyrion Lannister (Peter Dinklage) and Varys (Conleth Hill) meet with the Red Priestess. The woman’s statement to Tyrion about knowledge and power smacks of the “you know nothing Jon Snow” attitude adopted by doomed Ygritte (Rose Leslie).

Will Tyrion and Varys be able to work a deal with this red woman to try and settle down the troubles brewing in Meereen or will all that have to wait until Daenerys Targaryen (Emilia Clarke) returns? GoT spoilers indicate an uprising of the dissatisfied slaves that now see Dany as a Master.

Season 6 spoilers reveal that in Episode 5 or 6, Daenerys rides out of Vaes Dothrak with the full khalasar behind her, along with Daario Naharis (Michiel Huisman) and Jorah Mormont (Iain Glen) at her side. However, there will soon be an attack on Meereen that Tyrion and Varys try to fend off.

Will they have to give up and flee to find Dany? We’ll see. However, this new red woman may actually be an ally for Daenerys, as the Lord of Light has foretold the coming of a savior to fight the “Great Other” aka the Night’s King.

Speaking of that cold hearted jerk, Bran Stark (Isaac H Wright) goes dreamwalking again and this time finds himself alone facing down an army of white walkers that are heavily armed and look like trouble. Bran is stunned to find himself standing near the Night’s King.

Is this a sign that Bran has the knowledge required to defeat the white walker army and that’s why he’s facing off with them? Meera Reed (Ellie Kendrick) struggles to wake Bran from his walking dream. What insights might he gain and can the Night’s King see Bran too?

Anyone else notice that Tormund Giantsbane (Kristofer Hivju) was making sexy eyes at Brienne? Let’s hope that heats up! Don’t miss a moment of the show, be sure to share your comments below, and come back to CDL for a LIVE recap of ‘Game of Thrones’ Season 6 Episode 5 ‘The Door’ on Sunday May 22.