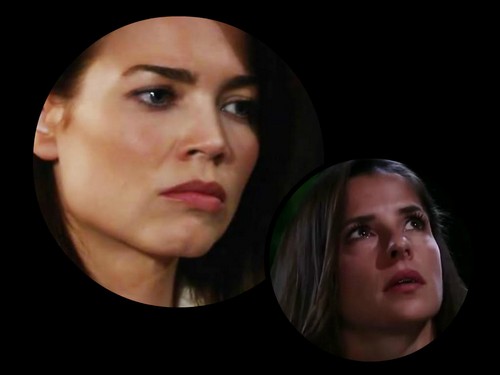 “General Hospital” (GH) spoilers hint that any chance for peace between Sam Morgan (Kelly Monaco) and Liz Webber (Rebecca Herbst) may burn to ashes along with Liz’s house because she will soon blame Sam for Jake Spencer’s (James Nigbor) life-threatening injuries.

Right now, Liz is distraught because Jake has once again been hit by a car and she said, “I’m the reason he’s in this bed.” But once Liz finds out that Sam was in her home and her interaction with Jake caused him to run away, she could blame Sam for this entire mess.

Of course, looking at the entire big picture, Sam would not have been in her house if Liz had never lied to Jason Morgan (Billy Miller) about his identity. But Liz isn’t a “big picture” kind of gal. Liz is sick that Jake is in dire shape – he’s got broken bones and internal bleeding.

Once Liz finds out that Sam was in her home uninvited, confronted Jake about the broken window and chased him down the stairs – which resulted in Sam hurting herself – Liz will likely blame Sam. For Liz, this gets the burden of blame for Jake’s injuries off of herself.

It’s true that Sam should NOT have been in the house. Jake’s parents weren’t there. She wasn’t invited in and then she was questioning a child without his parents. In fact, if Liz pressed things, Sam could probably be arrested for trespassing and endangering a child.

And all this will be made worse when Sam burns down – although unintentionally – the house that Jason bought for Liz. That house holds not only all of Liz’s memories with Jason, but everything she owns in the world, her kids’ photo albums and baby pictures – everything.

Losing her house will be devastating and, in Liz’s mind, that can all be traced back to Sam. If Sam had not chased Jake down the stairs, she wouldn’t have fallen, would not have turned on a heater and started a gas leak and would not have burned the house down.

Liz haters will want to trace this all back to Liz’s original lies. But, let’s also consider that Sam has a history of trespassing. She stops at nothing to find out what she wants – remember she and Jason broke into Wyndemere and rifled Nikolas Cassadine’s (Tyler Christopher) things illegally.

When Sam was at Wyndemere with Jason, she almost fell off the parapet. It’s fair to say that Sam has a track record of putting herself in danger when she’s digging into something. And she’s done it again at Liz’s house. The shame of it is, Sam was coming to Liz’s house to make peace.

Sam had just had a fruitful chat with Franco (Roger Howarth) and saw things from Liz’s perspective for a change and was coming to bury the hatchet. Instead, the end result is that Jake is lying broken in the hospital and Sam is about to be burned to a crisp as Liz’s house goes BOOM.

Naturally, Jason will rescue Sam and will sit by her bed at the hospital while she’s unconscious, but will Jason also think that Sam crossed a line with his son? No matter where your loyalties lie – Team Sam or Team Liz – think about this – would you want someone in your house confronting your child?

Liz may have lied, but Jake is just a kid. And no adult (unless they are a teacher or someone with permission to be responsible for your child) should confront someone else’s child like that – particularly if they weren’t supposed to be in your house.

Jake was there with a babysitter. Sam should not have been in the house. That’s the bottom line. But, to be fair, Jason and Liz should have educated Jake about how to cross the street since that’s how he “died” before. Crosswalk rules should have been lesson one the day he got back…

All that said, if the PCPD was brought in on this, Sam would likely be arrested for trespassing, child endangerment, criminal mischief and a whole host of other charges. Liz may think about that for a brief moment, but likely will not have Sam arrested.

The big question is whether what Sam has done – her actions that nearly got Jake killed – will impact Jason’s affection for her. He’s been getting memories back of their life, but will Sam’s callous disregard for the law be a roadblock for Jason?

Could Jason back off both Liz and Sam after this incident? Or will seeing Sam near death in the hospital override everything and bring Jason’s love for Sam back in full? What do you think GH fans? Do you think it was okay for Sam to come uninvited into Liz’s home?

Do you think Liz will be right to blame Sam for Jake’s injuries – and for burning down her house? Share your comments below on the latest Sam vs Liz incident and check back with CDL often for more “General Hospital” spoilers and news.