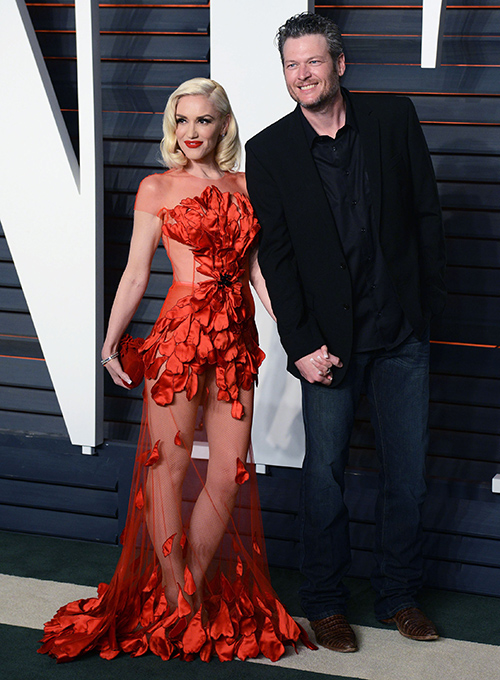 The Voice fans are thrilled over recent spoilers that Miley Cyrus will be appearing on the NBC reality TV show next season as a coach – everyone that is except for Blake Shelton’s girlfriend, Gwen Stefani. You would have thought that Miley and Adam Levine would be like two peas in a pod – but it turns out they can’t stand each other, and Miley has unexpectedly forged quite a bond with co-star Blake Shelton.

It really was shocking when NBC announced that The Voice was casting Miley Cyrus as a new coach, and not Gwen Stefani. Miley is basically just a younger and more relevant version of Gwen – the two women have similar styles. We aren’t the only ones who have compared Miley to a younger and hotter version of Gwen Stefani – and Gwen is reportedly starting to worry that Blake might feel the same way.

Blake couldn’t get enough of her, and kept bragging about how amazing she was. Plus, you also have to take into consideration the fact that Blake has no qualms about hooking up with his co-stars.

We really don’t see Miley having any interest in Blake – but stranger things have definitely happened, and unpredictable is one word we could all use to describe the wild pop star. We can see why Gwen Stefani would be a little jealous of Blake and Miley’s bond, but she might be giving her boyfriend a little too much credit.

What do you guys think? Is Miley a threat to Blake and Gwen’s relationship? Let us know what you think in the comments below!