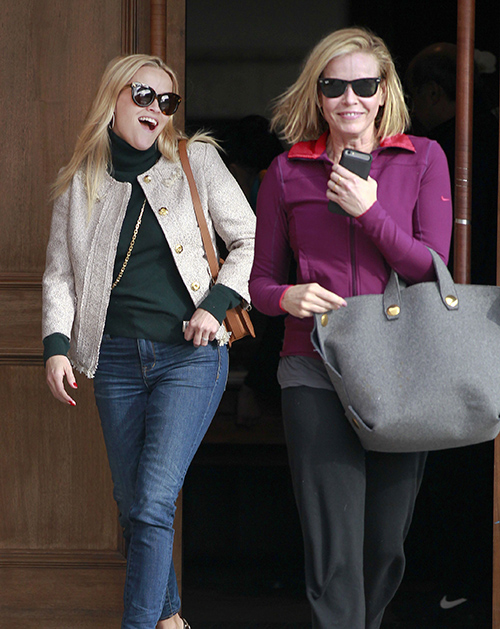 Heather McDonald admits to being terrified of Chelsea Handler. McDonald reveals sitting at the “Chelsea Lately” roundtable caused her to live in fear and suffer panic attacks. Heather also divulged that Handler berated co-workers all the time.

TMZ provided an audio preview of McDonald’s interview from the podcast “Allegedly,” hosted by Theo Vonn and Matt Weiss. In the audio clip, Heather reveals that despite “living in fear, 100% living in fear” and experiencing heart-pounding panic attacks, she enjoyed the job as a commentator on Handler’s show.

According to Heather, everything could be going great on the set of “Chelsea Lately” and then all of a sudden, out of nowhere, “something could happen and my heart would start beating and I’d be like, ‘Is this it?'” And not only was McDonald terrified of Chelsea, then entire crew reportedly lived in fear of the comedian and talk show host.

Chelsea really is a great person, Heather just doesn’t approve of the way Handler treats people. Heather McDonald divulged it’s really great to be Chelsea’s friend – Handler will make you feel oh so special and then bam! You’re not Chelsea’s friend anymore. Apparently, Chelsea Handler has no problem just cutting people out of her life without a second thought.

Heather recounts that there was “daily speculation” about the future of Chelsea’s contract with E! – the network that carried the controversial late-night talk show. Then, McDonald says she was caught completely off-guard when the news came down that Chandler and E! had parted company. Apparently, Heather found out on the way to a Lakers game.

Is this all just sour grapes? No one heard Heather McDonald complaining about Chelsea Handler while the comedian was cashing paychecks and peddling her book, “You’ll Never Blue Ball In This Town Again.”

Now that Handler has a seven-year contract with Netflix for a 4-part docuseries entitled “Chelsea Does” and a new talk show, Heather is speaking up to let the world know just how awful it was to be a member of the “Chelsea Lately” roundtable.