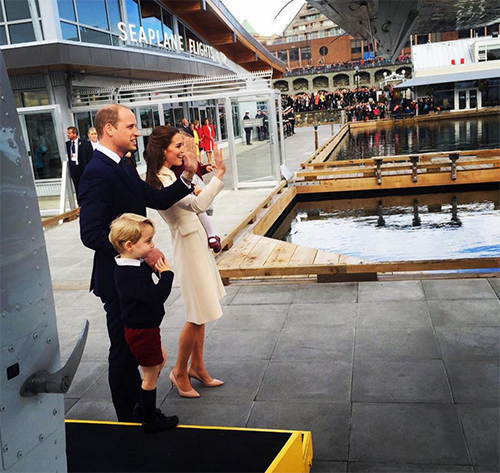 It looks like Kate Middleton and Prince William are going through the same dilemma plenty of parents have with their own children. In fact, Prince William recently admitted that he finds fatherhood quite frustrating at times because his children, Prince George and Princess Charlotte, don’t have “much of an attention span.”

According to Us Weekly, Prince William made the revelation during a trip he and Kate took on the island of Haida Gwaii last week. The excursion was made during their royal Canada Tour. While meeting with patients at the new Haida Gwaii Hospital, the Duke and Duchess commented on their children while watching a 3-year-old girl play with a pile of blocks on the floor. When Kate said, “George would love those,” William replied that their children Prince George and Princess Charlotte “don’t have much of an attention span, though.” He then told the little girl’s mother, “Your little girl is doing very well.”

Of course, there’s no doubt that the Duke and Duchess of Cambridge are making quite the effort to look less stiff and stuffy than the rest of the British royal monarchy. That’s why they are using the one area that seems to be working well for them while trying to look more relatable, and that’s parenting. Clearly, it’s the only thing Kate Middleton and Prince William can talk about these days, given the fact that they are raising two toddlers at home and doing nothing else.

While there’s no doubt that the Duke and Duchess have a team of nannies to help them raise Prince George and Princess Charlotte, they want to be seen as hands-on parents who are always there for their children during every sleepless night or milestone they reach. But then again, these are two people who have very little to do in their everyday lives.

Prince William and Kate Middleton have often used their children as excuses to cancel their royal engagements to stay home. After all, they have long been known as the ‘laziest couple’ in British royal history. Could their lazy ways extend to their parenting skills at home? Could a lack of structure and guidance in Prince George and Princess Charlotte’s lives be exacerbating their short attention spans?

Their children almost seem like accessories in their carefully curated image as a happy, picture perfect royal family who do little more than smile and wave for the cameras.

Tell us CDL readers, what do you think? Are Prince William and Kate Middleton trying to look more relatable to the public by appearing has hands-on parents? Let us know your thoughts by dropping us a line in our comments section below. And of course, check back with CDL for all the latest updates on the entire British royal family right here.

The Duke and Duchess met families and young people who have been supported by Kelty Centre for Mental Health. They were keen to hear from parents what support and information is available.

On their final day of #royalvisitcanada The Duke and Duchess meet families supported through tough times at The Cridge Centre.