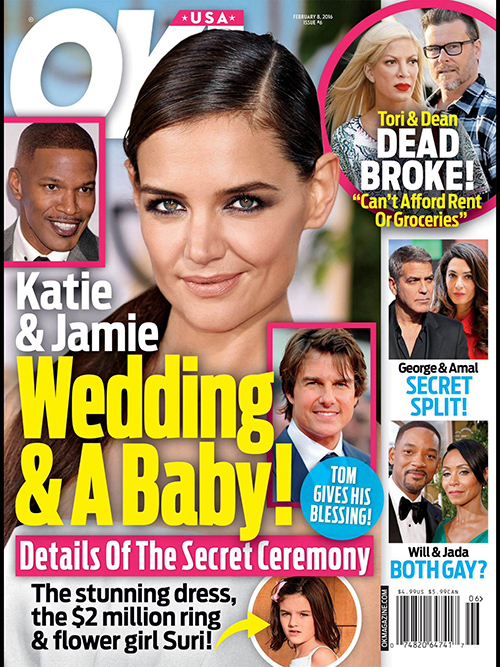 Katie Holmes and Jamie Foxx have tried hard to keep their romantic relationship quiet for a few years. But will word finally get out now that Holmes and Foxx are planning to wed in an ultra-private ceremony in the spring? Are Katie and Jamie rushing to get married because they are expecting a baby?

The Holmes-Foxx relationship could quite possibly be the worst kept secret in Hollywood. Katie and Jamie may think they have everyone fooled, but that’s just not the case. And it probably wouldn’t come as a shock if Foxx and Holmes are expecting a baby and rushing to wed before the bundle of joy arrives.

An insider recently divulged to OK! that Jaimie Foxx and Katie Holmes began seriously planning a wedding a couple of months ago. Allegedly, the couple will exchange vows in the serene acreage that surrounds Jamie’s 17,000 square-foot home in the appropriately named Hidden Hills, California.

The wedding will be a family affair, the source stated. Suri Cruise, 10, and Jamie’s six-year-old daughter Annalise will most likely serve as flower girls. Those closest to Katie and Jamie shared that Annalise and Suri, who have become fast BFFs, both adore Jamie’s 21-year-old daughter Corinne. Since everyone is getting along so well, it certainly would be the perfect time to tie the knot and bring a baby into the mix.

While the wedding itself won’t be lavish by Hollywood standards, Katie’s engagement ring is said to be a stunner. Jamie apparently has it already picked out – and it will set the actor back about $2 million! That must be some sparkler! When it comes to Katie’s wedding dress – the actress reportedly will choose a “simple and modern” Zac Posen creation.

If a baby isn’t already on the way for Katie Holmes and Jamie Foxx, then, in all likelihood, it won’t be long before Holmes gets pregnant. Friends inside Holmes and Foxx’s circle are of the opinion that a baby would further cement the strong bond Jamie and Katie already have.