Kelly Ripa Infuriated With Michael Strahan For Painting Her As The Villain In Publicized Feud? 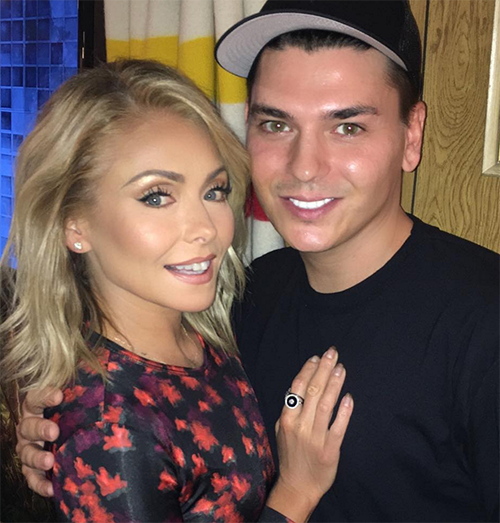 Kelly Ripa and Michael Strahan’s feud just got worse. There’s no doubt that the former morning talk show hosts are at war of words with one another, especially after Michael once again made Kelly look like the villain in their very publicized feud.

Kelly claims that she was absolutely blindsided over the news that Michael would be leaving the morning show to move to ‘Good Morning America’ instead. The petite blonde quickly became vindictive and jealous over the transfer, while making it so hard for Michael to work with her that he ended up leaving ‘Live!’ much earlier than anticipated. Kelly nearly dragged him through the mud with her snarky on-air comments that included jabs at his personal life and his past divorces. At one point, she even refused to go back to work until Disney executives had to beg her to come back.

And now Michael Strahan is opening up for the first time about his post-‘Live!’ relationship with Kelly Ripa, claiming that things are still cold as ice between them.

Michael told People Magazine in an interview, “At one point I think we were friends. I don’t know what happened at the end. I learned a lot from her, though. I wasn’t surprised by her reaction at all, but I can’t control somebody else’s actions. Toward the end of it all, we didn’t really communicate that much. I kinda looked at it like, ‘It was what it was.’ I come from a business where you have to collaborate. The show was going well? We’re all winning. That’s all that matters to me.”

It’s pretty clear that Kelly Ripa turned into a diva following Michael’s ‘Good Morning America’ announcement because, according to her, she should be making the move, not him. After all, she’s been in the business longer than the former NFL star. Surely, Kelly believes that she is the one who worked hard for years and carried the weight of the show for a long time before Michael Strahan’s arrival.

Yet, while Michael tried to stay professional about the whole ordeal, Kelly Ripa’s on air behavior made her look like a high-maintenance and demanding diva. At this point, it’s no wonder that she’s had trouble finding a co-host replacement for Michael Strahan, as no one in the television industry wants to work with her. Critics have even claimed that if there’s one person who has blown the whole ordeal out of proportion, it’s Kelly. Do you agree, CDL readers?

Crouching Kelly hidden cycle. Thank you @staceygnyc and @dukeguillaume for an incredible spin!! Crouch | krouCH | verb | adopt a position where the knees are bent and the upper body is brought forward and down … sometimes to avoid detection.