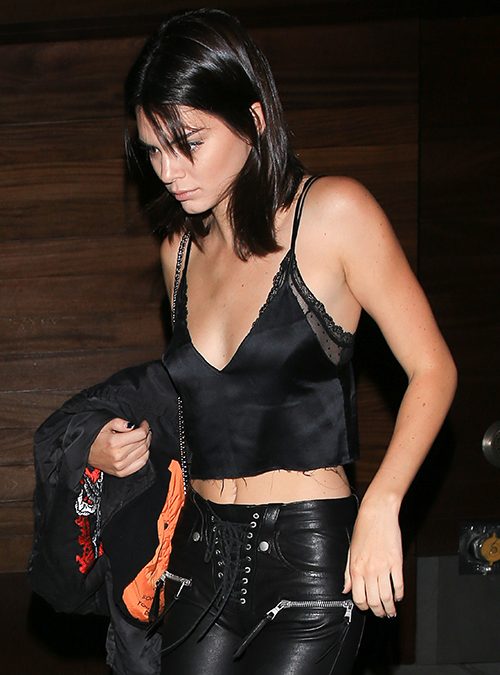 Has Kendall Jenner finally found a boyfriend? Kendall is reportedly dating ASAP Rocky; however, fans continue to question exactly what’s going on in the young model’s romantic life, as she was recently photographed leaving a NYC establishment with rapper Travis Scott. Unlike the rest of the Kardashian and Jenner family, Kendall Jenner has remained rather coy about her love life and private affairs.

While her sisters Kim Kardashian and Kylie Jenner have made a name for themselves flaunting their love lives on Instagram and Snapchat, Kendall Jenner has focused on her international modeling career while trying to distance herself from her reality television family as much as possible.

Kendall Jenner knows that she won’t be taken seriously if she acts like an Instagram celebrity on social media and that’s why she’s refused to speak about her love life, much less be photographed with a man by her side. Even though Kendall Jenner has been linked to a number of boyfriends in the past, like Harry Styles and Justin Bieber, she knows that her personal life will overshadow her modeling career, and that’s not what she wants.

Sure, Kim Kardashian and Kanye West, along with Kylie Jenner and Tyga, love when rumors about them make headlines and help push their names in the celebrity spotlight. But Kendall Jenner has different motivations. Kendall Jenner wants the same modeling career that Gisele Bundchen and Kate Moss have enjoyed in the past. And that’s why she’s downplaying her ASAP Rocky romance – or any other romance for that matter – by keeping it out of the public eye, before both her career and reputation suffer for it.

Still, this won’t stop fans from wondering what’s really going on and if Kendall Jenner and ASAP Rocky are indeed serious with each other.

In fact, when it comes to Kendall Jenner’s love life, she tried to deflect a question about her dating life by making it a non-issue. The model told Vogue’s September issue, “I just—my personal life, I’m so young. Whoever I’m dating, or going to be dating, is young, too. So I don’t think it’s figured out. Do you know what I mean? So if I don’t know what it is, I’d rather not let everyone else know.”

Take a look at our photo gallery below of Kendall Jenner and let us know what you think.

Image credit to FameFlynet: “Model Kendall Jenner and Travis Scott were spotted leaving a hotel in New York City, New York on September 13, 2016. The bright lights caused Travis to cover up his face, while Kendall walked through rather naturally.”