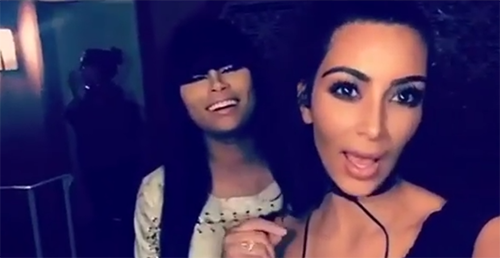 Rob Kardashian and Blac Chyna’s fight has definitely caused a major rift in the couple’s relationship, leading a lot of people to believe that the couple might be headed towards a break up before the birth of their first child. And now Kim Kardashian has inserted herself into the drama, by mysteriously ‘cradling’ Blac Chyna’s baby bump in a new Snapchat video.

Kim Kardashian and Blac Chyna were best friends before Kylie Jenner and Tyga’s romance destroyed their friendship. After all, an underage Kylie Jenner is the reason why Blac Chyna and Tyga’s family broke up, even though the controversial couple has been on-again and off-again in recent years. And that’s why many people suspect that Blac Chyna is seeking her personal revenge by not only romancing Rob Kardashian but also becoming pregnant with the reality television star’s first child.

But now that Rob Kardashian has deleted all of Blac Chyna’s photos on his Instagram account, leaving no trace of their relationship behind, Kim Kardashian has inserted herself into the drama by becoming Team Blac Chyna. The reality television star shared a Snapchat of her cradling Blac Chyna’s baby bump in San Diego this week.

This move is surely going to upset an already volatile Rob Kardashian even more, as he hasn’t been on good terms with his sister Kim Kardashian or anyone in his family for that matter. A Blac Chyna and Kim Kardashian friendship might very well cause a Rob Kardashian meltdown if this keeps up.

If that weren’t enough, sources indicate that the reason behind Rob Kardashian and Blac Chyna’s break up is because he allegedly found racy texts on Blac Chyna’s phone from her ex, Tyga. One source close to the Kardashians dished, “Rob lost it. He was yelling, ‘people told me to watch out for you!’ and ‘I hate cheaters.’”

Blac Chyna pregnant and cheating on Rob Kardashian with her ex Tyga would definitely be a reason for the reality star to break off their engagement. They might not even make it to the baby’s birth. Plus, could anyone imagine Blac Chyna and Tyga getting back together again and raising a Kardashian baby on their own? What would Kylie Jenner say? Is Kim Kardashian secretly hoping that her brother will break up with Blac Chyna? Keep up with CDL for all the latest updates on the Rob Kardashian and Blac Chyna drama right here.