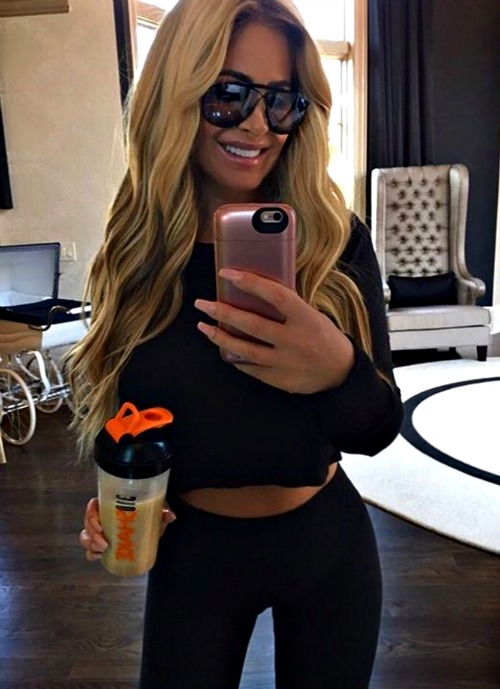 Kim Zolciak is hitting back at internet trolls that are bullying her 19-year-old daughter, Brielle Biermann. In fact, things have gotten so bad that the reality television star was forced to slam her daughter’s cyberbullies with an expletive message for those who continue to write negative comments on Brielle’s social media accounts.

According to People Magazine, things have gotten so bad for Brielle that Kim has stepped in to defend the teen from some of the most vicious attacks she’s ever seen online.

Many fans have been criticizing Kim Zolciak for not only going under so many procedures to the point in which she now looks unrecognizable, but for supposedly encouraging her young daughter to do the same.

Kim held nothing back when she wrote, “Oh hell no, you f—ers on Bravo TV under Brielle’s pictures writing comments. You’re f—ing with the wrong one, honey — the wrong one! So, you guys want to know how I manifested this amazing life and have an amazing husband and six healthy, beautiful children? I don’t have these blessings because I sit behind a computer screen and write nasty f—ing comments about a 19-year-old. I would love for all you f—ers to post your daughter on your page so I can tell you exactly what the f— I think about her. Okay?”

While there’s no doubt that Kim is doing her part as a mother by defending her daughter, Brielle has grown up in the public eye thanks to her mother’s reality television career. The two women constantly document their life from behind the scenes on their social media accounts for fans to comment, like and follow for years now.

If Brielle’s cyberbullies have gotten so bad, the least Kim can do is encourage her to deactivate her accounts or at least change the privacy settings to avoid all of the bullying.

Then again, Kim Zolciak has been exploiting her family to help boost her celebrity profile and garner the media attention she so desperately craves. On the other hand, if both Kim and Brielle did deactivate their social media accounts they wouldn’t have anything left to fall back on, considering it’s the only outlet that has allowed them to stay in the headlines.

If they can’t handle all the good and bad that comes with being a public figure, then it’s perhaps time they bow out of the celebrity world for good.

Tell us CDL readers, do you think Kim Zolciak would be a better mother if she protected her family by keeping them out of the limelight? Should Kim and her family quit social media for good?

Always working!!! @kroybiermann always has perfect form that’s what I need help with! Kroy spends hours and hours training .. When you love what you do it’s easy ❤️