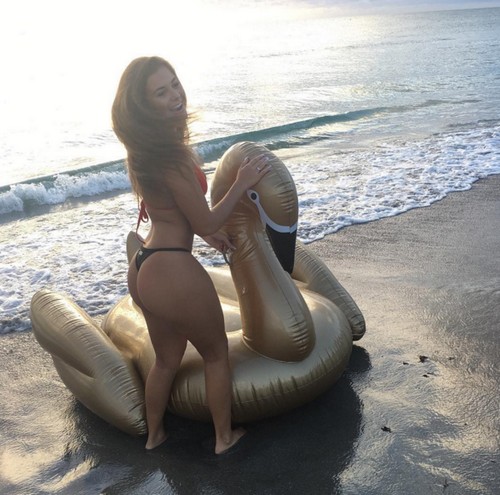 Lebron James has some explaining to do about the Rachel Bush Instagram cheating scandal! Is the Cleveland Cavaliers basketball player a cheater? Lebron married his now wife Savannah Brinson in 2013, since then the couple have had three children together – and appeared to be happily married. But, that didn’t stop Lebron from sliding into an Instagram model’s inbox.

Rachel Bush got an unexpected direct message on Instagram from Lebron James’ official account. Rachel didn’t respond though – apparently she wasn’t interested, instead she took a screenshot of the message and uploaded it on Twitter, instantly causing some major backlash.

In Lebron’s defense, the message seemed pretty innocent and he simply wrote, “Hey what’s up.” 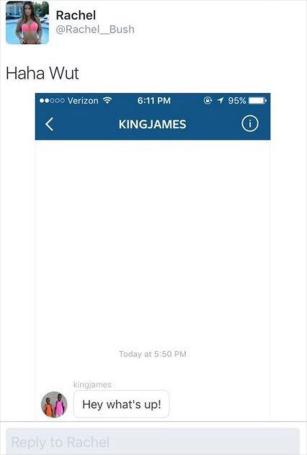 Regardless of the content of the message, Rachel’s screenshot went viral instantly (and she also nearly doubled her followers over night). There is no way Lebron James’ wife Savannah Brinson didn’t get wind of his direct messages, and you have to wonder how many other Instagram models have been contacted by the Cleveland basketball player.

Rachel Bush has since deleted her tweet outing Lebron James – but the damage was already done, and we all know you can’t “delete” anything from the Internet in this day and age. The photos of Lebron James’ messages to Rachel are everywhere!

Interestingly enough, Rachel has a boyfriend, another pro athlete! Bush is reportedly in a relationship with Cleveland Browns’ Jordan Poyer, and they have been dating for nearly a year now.

Call us crazy, but we have a sneaking suspicion that Jordan Poyer is not too happy about fellow Cleveland Athelte Lebron James trying to contact his girl.

What do you guys think, is Lebron James a cheater? Or was he trying to contact Rachel Bush for completely innocent reasons? How many other Instagram models do you think he has been messaging? Let us know what you think in the comments below!