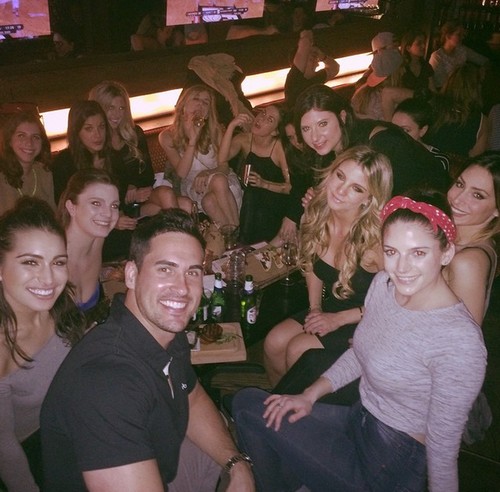 Josh Murray has a new girlfriend – Chris Soules’ ex Ashley Iaconetti, and Andi Dorfman is not happy about it! Andi’s former fiancé posted a photo on Twitter of himself surrounded by a dozen women at a bar, but Bachelor fans instantly noticed that the woman cuddled up closest to him was Bachelor contestant Ashley Iaconetti. After faking their engagement for six months for publicity, Andi Dorfman and Josh Murray “broke up” and went their separate ways so Josh is technically single and ready to mingle – but Andi Dorfman is still furious that he would dare move on before she did. Then again – Andi was spotted on a date with her ex Nick Viall just a few days after their break up, so she doesn’t exactly have a leg to stand on.

Why is it that Bachelor and Bachelorette contestants keep hooking up with each other’s sloppy seconds? After the photo of Josh Murray and Ashley Iaconetti hit the Internet, the self-proclaimed virgin informed TMZ that Josh “reached out to her” after he saw her on the show and asked her out on a date. On Chris Soules’s season of The Bachelor Ashley I’s diva antics and constantly bragging about her virginity rubbed everyone watching at home the wrong way – along with her epic fight with fellow crazy lady Kelsey Poe. But, apparently Josh found the “Princess” (which she referred to herself as) very charming.

Once we get over the irony of the fact that Andi Dorfman’s ex Josh Murray is hooking up with her ex Chris Soules’s ex Ashley I. – we can’t help but laugh at how much of a slap in the face it is to the 2014 Bachelorette. Andi Dorfman used Josh Murray from day one to try and make a name for herself and boost her celebrity status. While she is in NYC desperately trying to remain relevant since she is no longer the reigning Bachelorette, he ex-fiance is partying like a rock star with a dozen women and boasting about it on social media.

Do you think Ashley Iaconetti and Josh Murray make a cute couple? How long until you think Andi Dorfman finds herself a boyfriend to rub in Josh Murray’s face? Let us know what you think in the comments below and don’t forget to check CDL tomorrow for more Bachelor and Bachelorette spoilers and news.