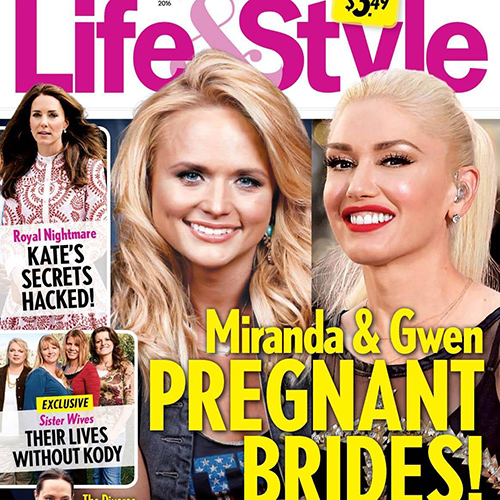 On September 15, 2016, Miranda Lambert announced the cancelation of the remainder of the Keeper of the Flame Tour. The official reason given was that Miranda was put on mandatory vocal rest, but there is speculation that Miranda is expecting a baby with boyfriend Anderson East and that the couple is planning to wed before the bundle of joy arrives.

Miranda’s ex-husband, Blake Shelton, may have baby news of his own. A source spoke with Life & Style Weekly and revealed that Gwen Stefani is pregnant and planning to wed the country music mega-star as soon as possible.

The most recent cover if Life & Style Weekly declares, “Miranda & Gwen Pregnant Brides!” The insider revealed that both Blake’s current love and former wife are “ready for mommy duty!” Are Blake and Anderson are preparing for marriage and fatherhood?

Apparently, Miranda believes that this is the perfect time in her life for a baby. “Her career has been a priority until now [but] Miranda is always telling friends about how Anderson would make a great dad,” the insider divulged. Anderson East and Miranda Lambert seem happy and very much in love and absolutely ready to start a family.

Meanwhile, Gwen, who already has three boys with ex-husband Gavin Rossdale, is ready to be a mom again. A wedding reportedly has been in the works for some time now. Gwen has already started redecorating Blake’s homes in Oklahoma and Nashville; she began that little project during the holidays of 2015.

Insiders have repeatedly revealed that Gwen Stefani and Blake Sheltonhave included a nursery in the redecorating plans for his homes as well as Gwen’s Los Angeles mansion.

Miranda and Blake shocked country music fans when the couple divorced in July 2015. There was buzz that Miranda had cheated on Blake with good buddy and fellow country music singer Kenny Chesney.

After a reported scandalous affair with a nanny, Gavin Rossdale and Gwen divorced. Gwen joined ‘The Voice’ as a coach, met Blake, the sparks just flew, and the rest is Hollywood history. Before anyone knew it, Blake and Gwen went public with their romance. Reportedly, Miranda and Anderson were secretly engaged in August 2016.

Who will make their exciting baby news and wedding plans public first – Miranda Lambert and Anderson East or Blake Shelton and Gwen Stefani? Leave your thoughts in the comments section below and don’t forget to keep checking CDL for all your latest, up-to-date celeb news.

@KuuKuuHarajuku video is out now!  Link in Bio for full video. Going #KuuKuu on Oct. 3rd for my @NickelodeonTV new show!!! Gx

First day of the tour here in Ann Arbor. Pumped to have our pal, @brent_cobb, out with us! See y’all out there! 📷: @mirandalambert

“I’m carrying your love with me” -King George Delta Dawn tuckered out from a 3 and a half mile hike this mornin. (Not gonna lie, I was tuckered too) Thank the Lord for shoulders. What a great place to rest. Especially when it’s true love. “. #shoulderpad #texas🇨🇱 #sheismyrock #roaddog #highwayvagabonds @junkgypsy (thx for the bad ass hat.)