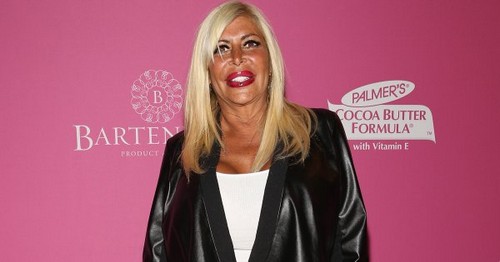 “Mob Wives” star Big Ang is dead. Angela Raiola, the reality star’s real name, lost her battle with cancer on February 18 at the age of 55. Ang died at 3:01 a.m. according to a statement issued by spokesman Vinnie Medugno. Angela family had gathered in her hospital room and Ang received last rites just hours before as Mr. Real Housewife exclusively reported.

The sad announcement of Angela’s death was made via the “Mob Wives” official Twitter account. Vinnie posted, “This is @vinniemedugno on behalf of Angela Raiola, please see below.”

The post is dated February 18, 2016, 4:29 AM and informs fans that Big Ang “peacefully ended her battle with with cancer, and was called home. She was surrounded by nothing but love from her immediate family and closest friends.”

The statement went on to say that Ang thought “Mob Wives” fans were “some of the mot special people in her world and loved you immensely.” Vinnie thanked everyone for their love, prayers and “unconditional support of Angela right to the very end.”

Angela’s Twitter page will remain open so that “Mob Wives” fans are able to keep celebrating Ang’s life – who she was and will always be. Vincent ended the post saying, “It has been my esteemed privilege, and honor to represent her in the highest regard via social media.”

In March 2015 Big Ang was diagnosed with throat cancer when a tumor the size of a lemon was found to be blocking her airway making it difficult to breathe. During an eight-hour surgery the tumor was removed, as well as the lymph nodes on the left side of Angela’s neck.

Doctors believed the performer was cancer-free in October 2015 but a regular check-up in December showed it had returned and spread throughout Ang’s body. Angela’s diagnosis and battle with was documented during the VH1 show “Couples Therapy with Dr. Jenn.”

Our thoughts and prayers are with Angela Raiola’s family during this difficult time. Please leave your condolences in the comments section below and come back to CDL for the latest celebrity news.