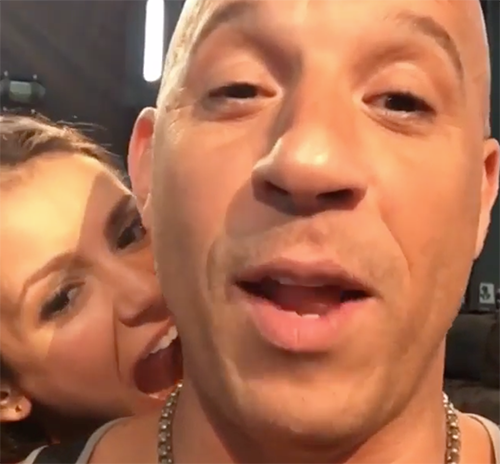 Sorry “Vampire Diaries” fans, but Elena Gilbert actress Nina Dobrev still has no plans of returning to The CW series that established her career in Hollywood. There is still no hope in hell that we’ll see the 27-year-old actress reuniting with her onscreen lover and ex-boyfriend Ian Somerhalder, despite the confirmed renewal of the Vampire themed show for season 8.

Unfortunately, it’s not true that Delena will be returning. Despite reports that Nina could be making a comeback while Ian is departing from “The Vampire Diaries,” there is no confirmation whatsoever that Dobrev is interested to return, especially now that she has kept her distance from the show and her former leading man.

Just yesterday, Dobrev took to the social networking site to share a snap of herself wearing a warm and fashionable coat to beat the blistering cold on set. She wrote, “Brrrrrrrrrrr. It’s cold in here.” A little later, she uploaded a clip which features the lead actor of the movie. The video clip was actually a repost of what the 48-year-old “Fast & Furious” star said about Nina Dobrev

Moreover, Diesel was indeed right when he noted that the actress is funny. In her repost of the clip, Nina wrote a quirky caption on how she made Vin say all the wonderful things about her. She wrote: “I paid Vin to say all those nice things about me. Best $50 bucks I’ve ever spent.”

Meanwhile, on the same day, Ian Somerhalder took to Instagram to show his hard work and best effort in directing an upcoming episode of the “Vampire Diaries.” Aside from sharing a snap of him doing his director’s duties, he asked his fans to not miss the April 1 episode he directed. He wrote: “Working on post production of episode 716 that I directed. It airs FRIDAY APRIL 1st– can watch it with me? Let me know what you think? I know that you are all very busy but we worked very hard on this episode, to tug at your heartstrings…”

Since Nina Dobrev left, the show has been very different, storyline-wise and ratings-wise. However, executive producer Julie Plec believes that the series will survive as long as Ian and his other lead costar Paul Wesley are up for it. At the start of this year, Plec admitted that the show will follow the brothers and will continue their story as long as the actors will not walk away from the show.

But now things are very confusing since reports claiming the imminent death of Somerhalder’s Damon Salvatore have surfaced. Then, there’s the rumor about Dobrev considering a possible involvement on the show’s spinoff “The Originals.” Should the newly single actress choose to join the spinoff series?

Don’t miss the latest scoops and gossip in Hollywood; tune in to CDL for your regular updates!