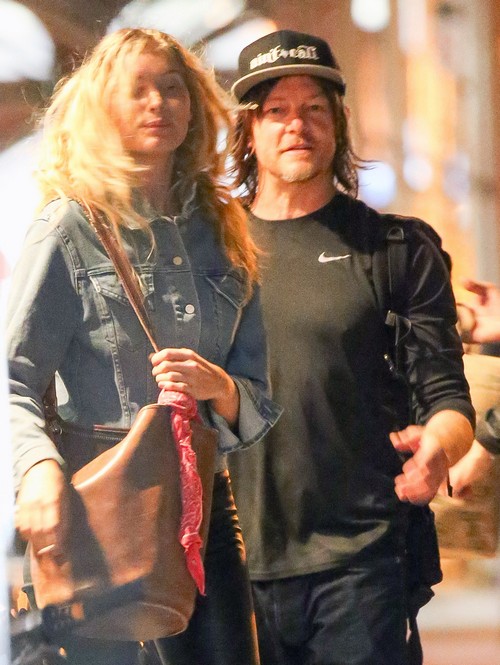 Norman Reedus was spotted with a mystery blonde date in NYC. Norman Reedus’ alter ego Daryl Dixon may be in trouble on the “The Walking Dead” but Norman himself seems to be living the high life. Norman was spotted out in New York City with a gorgeous mystery blonde on his arm this week – does that mean he’s done with his tawdry affair with Diane Kruger?

Diane Kruger starred alongside Norman Reedus in the recent film Sky, and her long-time love Joshua Jackson also had a small part in the flick, but that doesn’t seem to have stopped her from making a move on the sexy shaggy star of the AMC series behind Jackson’s back.

Diane reportedly straddled Norman at a bar while they were boozing, kissing him aggressively which shocked onlookers. Kruger also spent time sitting on Reedus’ lap at the movie premiere and the two were very handsy in photos from the premiere event.

One thing we can say about Norman Reedus is that he likes long-legged babes. The blonde on his arm in New York City strongly resembles the tall Diane Kruger. There have also been persistent rumors that he was hooking up with much younger “The Walking Dead” costar Emily Kinney (Beth, TWD) – another gorgeous blonde.

Norman Reedus was also spotted getting cozy with other TWD co-star Laurie Holden (blonde!) who played the now dead Andrea. When asked about walking a red carpet with her and a kiss they shared, Reedus tweeted, “I’ve kissed all of em. And I mean ALL of EM.”

Whether he meant all of them as in all the ladies he works with on the AMC show or all of them as in “all” of Laurie Holden is unclear. What is clear is that Norman Reedus is a ladies man who’s showing no signs of slowing down.

According to reports, Diane Kruger was able to smooth the waters with Joshua Jackson over the alleged cheating by moving to New York City to be closer to him – but then again that’s where Norman Reedus was just spotted with his new lady, so that puts Kruger in close proximity to her rumored extracurricular lover…

Reedus has had an interesting love life for certain – he shares teenage son Mingus Reedus with model Helena Christensen – and was rumored to have enjoyed a brief relationship with the ever scandalous Courtney Love.

No word yet on the identity of the mystery lady spotted with Norman Reedus in the Big Apple – or whether he’ll survive the Season 6 finale of The Walking Dead airing this Sunday. Perhaps Reedus was consoling himself with the leggy young lady after he found out Daryl does die…

What’s up with Norman’s new girlfriend? Come back to CDL for all your TWD news, spoilers and recaps!