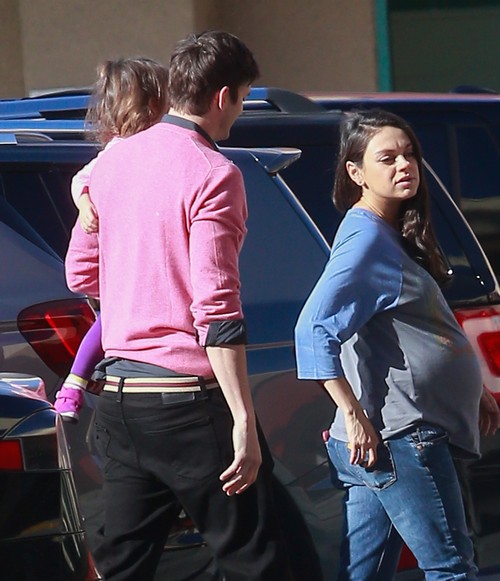 A pregnant Mila Kunis and Ashton Kutcher were spotted grabbing breakfast with their daughter in Studio City, California this past weekend. Mila wore a blue oversized maternity top and jeans while Ashton carried their 2-year-old daughter Wyatt. Reports indicated earlier this week that Mila Kunis wasn’t very enthusiastic over a name Ashton had picked out for their unborn child.

Even though Mila has been very quiet about her pregnancy, Ashton opened up about wanting to pick a very unique name for his son during an interview with late night talk show host Conan O’Brien. Ashton told Conan, “There was a rallying cry from a collective that believed in the name Hawkeye. I’m an Iowan, so to have a kid named Hawkeye? He could be a doctor! It didn’t fly, it didn’t get across the Mila threshold. It came to the threshold but then it got knocked out.”

Sure, many parents in the entertainment industry have been giving their babies bizarre names for years now, but Mila Kunis doesn’t want to be one of them. The actress knows that if her son has a name like Hawkeye Ashton, he will be ridiculed and bullied by his peers for years to come.

Ashton Kutcher added that while they have agreed on a name, they are not ready to share it with the public just yet. In fact, the couple has been doing everything they can to keep their family out of the spotlight. If it weren’t for their Hollywood careers, there’s no doubt that Mila would want to move out of Los Angeles permanently.

There were even reports that claim Mila was furious when she found out that Ashton accidentally revealed the sex of their baby during an interview with ‘The Today Show’ earlier this month. Unlike other celebrity moms, Mila is not dishing every detail about her pregnancy in her interviews and that’s why she wants Ashton to keep quiet about it, too.

In fact, it’s not surprising that Mila Kunis looks none too pleased that the paparazzi are even following her and Aston during their family breakfast in these photos. Take a look at our gallery below and tell us, does it look like Mila is about to give birth any day now? Drop us a line with your thoughts in our comments section. Also, check back with CDL for all the latest news on Mila Kunis and Ashton Kutcher.

Mila Kunis and her husband Ashton Kutcher were seen grabbing breakfast with their daughter in Studio City, California on November 19, 2016. She showed off her baby bump with a tight fitted tshirt while they were out. FameFlynet