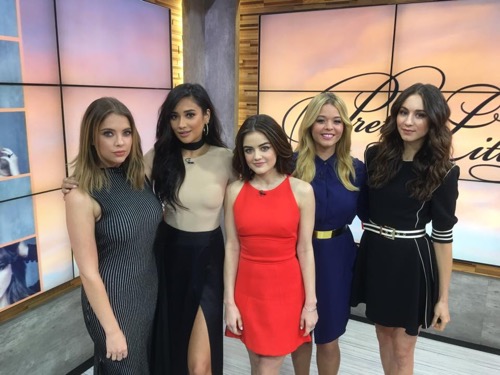 Pretty Little Liars returns to ABC Family tonight with an all new Tuesday January 12, season 6 winter premiere episode 11 called “Of Late I Think of Rosewood,” and we have your recap and spoilers below. On tonight’s episode, the ladies return to Rosewood after five years when they are summoned by a court to attend a hearing about A.

On the last episode, who killed Toby’s mother? Who hit Alison in the head with the rock the night she went missing? Who was Red Coat? Who killed Bethany? Who was the Black Widow? Why had “A” been targeting the PLLs all this time? After years of torture, Alison, Aria, Emily, Hanna and Spencer finally came face-to-face with their tormentor and learned the story of how and why Charles became “A”. Did you watch the last episode? If you missed it, we have a full and detailed recap right here for you.

On tonight’s episode as per the ABC Family synopsis, “after years of tormenting and numerous shocking revelations, the Liars finally uncovered the true identity of “A” in the summer finale of season six. Now, five years later, the girls have each pursued their own paths and have started adjusting to a life without “A,” when something happens in Rosewood that forces them to go back to where it all started. Torn between their old habits and their new lives, the events in Rosewood compel the Liars to join forces once again, as relationships are put to the test and secrets are revealed. Having matured over the past few years, these are not the same girls who left Rosewood. As new lies emerge – how will they push forward without going back?”

The season 6 episode 11 of PRETTY LITTLE LIARS is going to be really exciting and we’ll be recapping it for you right here.

Tonight’s episode of Pretty Little Liars kicks off five years later – the liars are all grown up. Back at Rosewood High – Alison DiLaurentis is now a teacher, she is reading a passage from a book aloud to her class. The bell rigs and the kids all rush out of the room. Dr. Rollins pays Alison a visit at school – he tells her that the judge approved a hearing, but it is in four days. Alison writes a letter to each of the girls, Spencer, Hanna, Aria, and Emily – telling them about the hearing for Charlotte’s release. Alison begs the girls to give her a chance to talk to them in person before the hearing.

Aria is working a book signing at a book store when she reads her letter. Hanna is on an airplane, reading her letter from Alison. Emily takes her letter out and rereads it at a tiki bar on a beach where she is working. Alison visits Charlotte at the hospital and reassures her that her plan is going to work and the girls are going to come through for her.

Spencer arrives home in Rosewood and takes a stroll through town – she spots some young girls sitting outside the café where she used to sit with the other liars. Spencer reunites with Hanna, Aria, and Emily at the coffee shop – they sip coffee and catch up on their careers and lives. Hanna is happily engaged and wants to have her wedding in Italy, and Aria has a boyfriend named Liam. Talk turns to what is going to happen at the hearing. Hanna isn’t ready for Charlotte to get out, she has enjoyed “five “A” free years.”

Radley Sanitarium has been completely remodeled – Hanna meets her mother Ashley there for lunch at the new his restaurant. Ashley wants to know why Hanna hasn’t brought along her fiancé Jordan. Talk turns to Alison – Ashley wants to make sure that she remembers everything Charlotte and Alison did to her. She doesn’t think that Charlotte should be released.

Aria stops by her Dad’s house and he has news for her about Ezra – apparently he is back from South America and his girlfriend Nicole went missing while they were down there building houses. Ezra isn’t in a good place. At the Hastings house Spencer and her mom talk about the campaign, Spencer’s mom is running for Senate.

Aria heads to the Brew and tracks down Ezra, they sit down and Ezra fills Aria in on Nicole’s disappearance. He is shaken up and says that he tried everything to find her before he came home.

Spencer stops by Toby’s house to say “hi.” He is outside working on a remodeling project. They chat about Spencer’s work in Washington. Apparently, Spencer ran in to Caleb in Washington. She changes the subject quickly. Toby offers to take Spencer out to dinner while she is in town and she accepts his invitation.

Alison meets up with the girls – she tells them that Charlotte is all better now, she has gone through counseling and even is allowed to have supervised visits outside of the hospital. Alison wants them to tell the judge that they aren’t scared of Charlotte any more – so that she can get out of the hospital and be free. Spencer, Hanna, Emily, and Aria are skeptical, they don’t want to lie for Alison any more. She begs them just this last time so that she can “finally have her family together.”

Spencer heads to her mother’s speech to support her – while she is waiting for her mother to introduce her to the crowd, Mona pops up. Spencer tries to blow her off, but Mona wants to chat about the past. She confesses to Spencer that she still has nightmares and has to take medication to cope with the anxiety.

The next day everyone heads to Charlotte’s hearing, Spencer and the rest of the girls take the stand and they each tell the judge that they have moved past what happened to them in Rosewood. They all tell the judge that they aren’t afraid of Charlotte – and think that she should be released. While Aria is reading her statement, Ezra walks in to court and throws her off. She has a flashback to the doll house and then she tells the judge that she would not feel safe if Charlotte was released. Mona takes the stand next and she unexpectedly begs the judge to set Charlotte free – everyone thought that she was going to bury Charlotte with her testimony.

After the hearing Emily and Spencer head to the Brew for coffee – they get a text from Alison saying that the judge said Charlotte could go home. Aria and Hanna meet up with them and they decide to all turn their phones off so that they can have some drinks together at the newly remodeled Radley Sanitarium. They drink the night away and giggle like they are still in high-school, before they turn in for the night they even “Cheers” for Charlotte.

The next morning the liars all wake up in Hanna’s hotel room – extremely hungover. They get a frantic phone call from Alison – Charlotte snuck out in the middle of the night and Alison can’t find her. Meanwhile, Toby is at work – someone found a dead woman outside of the Church, she appears to have jumped off the bell tower, it’s Charlotte. They are ruling it a suicide.

Emily rushes to Alison’s house, Dr. Rollins has her heavily sedated. He asks Emily to stay with Alison until she falls asleep. Emily sits on Alison’s bed with her while she sobs.

Later that night, Caleb stops by Hanna’s room – he wants to make sure that she is okay after the hearing and Charlotte committing suicide. Hanna feels horrible, if they hadn’t lied to the judge then Charlotte wouldn’t have been able to get out and kill herself. Hanna asks Caleb if he is staying in the hotel but he reveals that he is staying at Spencer’s barn – and things get awkward. Caleb heads downstairs to the lobby and Spencer is waiting for him, apparently they are very close these days.

The liars head to Charlotte’s funeral to pay their respects. Everyone is shocked when the door to the church opens and Sara Harvey marches in, in a black veil and takes a seat. The liars are all obviously shaken up by her arrival. After the funeral Lorenzo stops the liars and tells them not to leave town – Charlotte’s death was just ruled a homicide, she was already dead when she was thrown from the bell tower.