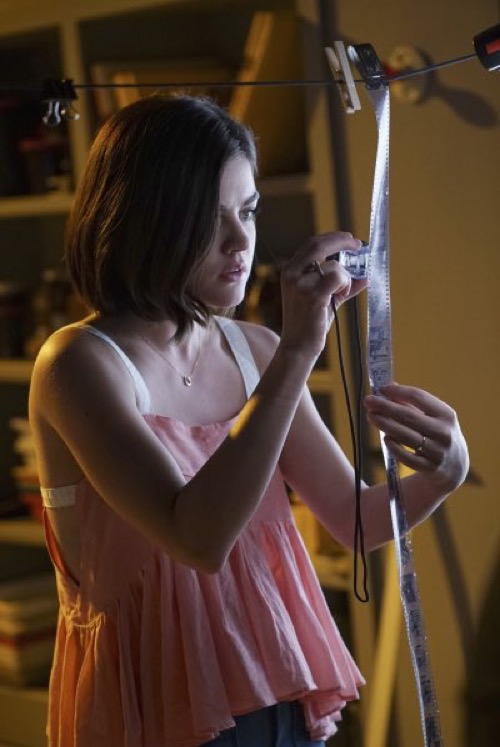 Pretty Little Liars returns to ABC Family tonight with an all new Tuesday June 30, season 6 Episode 5 called “She’s No Angel,” and we have your recap and spoilers below. On tonight’s episode, Mona [Janel Parrish] comes back to town after faking her death and faces questions from the cops and Lelsi’s sister. Meanwhile, Hanna [Ashley Benson] dedicates herself to assisting Mona; Emily suggests that Sara [Dre Davis] get emancipated; and Alison [Sasha Pieterse] bonds with Lorenzo. [Travis Winfrey]

On the last episode, after lying to Alison and Jason about Charles, Kenneth came clean about the family’s connection to the young boy. While he wouldn’t give much detail about Charles’ past, he said enough to give the PLLs a clue of where to look for the missing pieces – Radley Sanitarium. With Radley now closed and the files shipped off to be shredded, the girls had to act fast before all traces of Charles’ past disappear. Did you watch the last episode? If you missed it, we have a full and detailed recap right here for you.

On tonight’s episode as per the ABC Family synopsis, “Mona returns to Rosewood in a very fragile state as she must answer to the police for faking her death. Matters only get worse when she is confronted by Lesli’s sister about Lesli’s inadvertent involvement in Mona’s plot. Hanna is determined to help Mona out, not only to reassure her she is safe from Alison but also to try and repair Mona’s friendship with Lesli. Emily tries to help Sara with her troubled home life by encouraging her to explore the possibility of emancipation. Spencer, on the other hand, finds help from someone from her past.”

The season 6 episode 5 of PRETTY LITTLE LIARS is going to be really exciting and we’ll be recapping it for you right here.

Tonight’s episode of Pretty Little Liars kicks off with Spencer having a nightmare of a little girl in a nightgown dancing around what appears to be an abandoned hospital with empty bath tubs in it, she begins moving around like a contortionist and arching her back while creepy music plays. In her dream, Spencer finds a pair of hospital issued sandals on the floor with Charles’s name on them.

In the morning, Spencer calls Aria and tells her about her dream and the little girl in the creepy room. Spencer begins ranting about her mother, apparently she was offered the valedictorian spot at their graduation and she doesn’t want to take it. But her mom is trying to force her to be the valedictorian.

Hana comes downstairs and finds Mona sitting in her kitchen with dark sunglasses on. Mona wants Hanna to give her a ride to the police station, she has to come in for questioning and she is scared that she will be arrested for faking her death. Alison wakes up and hears the police standing outside of her house talking about her and how much of a psycho she is.

Emily is getting ready for school. She overhears Sara on the phone with her mother – who is apparently too drunk to speak. Emily feels bad, she asks Sara to go to the movies with her. Sara says that she can’t go to the movies, she has to go home and deal with her mother. Emily thinks it is a bad idea, she thinks Sara should cut her mom off and get emancipated.

Aria heads to her dad’s office to work on some homework. Clark – the guy from the photo lab – stops by. He invites her to take a trip with him to the junkyard to do a photo shoot. Aria tries to turn him down, but Clark says she should go to take pictures for the photo contest. Apparently, the winner gets to spend the summer in Los Angeles working at a magazine. Aria is thrilled at the idea of leaving Rosewood, she agrees to go with him to take some pictures.

Alison’s dad finds her standing on the porch – he is upset that she is outside, Alison complains that she just needed some air. She rants that she overheard one of the cops dissing her. Her dad doesn’t want to hear it, he tells her to own what she has done because bad behavior has a way of catching up to everyone.

Mona and Hanna stop at the brew to get coffee, they run in to Mona’s old friend Leslie. She shouts at Mona that she ruined her life and has to go to the police station to be questioned because Mona made her an accomplice in a crime and used her to fake her own death. Leslie shouts that if she gets charged with perjury she will make sure Mona pays for it and will live to regret it before she storms off.

Spencer heads to school and tells Hanna that they need to come up with a plan to get in to Radley and find out who is impersonating Charles. Hanna reminds her that they don’t even know for sure if Charles is dead yet. Spencer wants to talk to Mona since she was in Radley, she thinks she might know Charles. Spencer is high as a kite and can’t stop eating her pot cookies. Hanna notices, and asks her if she is on drugs. Meanwhile at the junk yard, Clark asks Aria out on a date – Aria explains that her life is really complicated right now and she isn’t dating. Clark explains that he saw her on the news and he knows what is going on with her, he apologizes if he made her feel uncomfortable.

At Alison’s house, Lorenzo is going over information on a summer camp for the church that he wants her to volunteer at. Alison’s dad comes home and freaks out, he thinks that Alison lied about the cops talking crap about her earlier just so that she could get Lorenzo appointed to guard their house. He shouts at Lorenzo to get out.

At the junkyard, Aria and Clark are snapping photos when Aria sees a shadow behind her. She runs into a shed filled with junk to try and see who it is. Something falls inside the shed and Clark rushes in to see what is going on. Aria insists that it is nothing and everything is fine.

Spencer heads to an AA meeting, she sits in the back and scarfs down the cookies while Dean talks about his addiction. The counselor stops the meeting to yell at Spencer and tells her that the refreshments are for after the meeting. Aria and Clark head back to the campus to develop the photos, Aria is shocked when she looks at Clark’s negatives and sees that he might have gotten a picture of “A.” Aria calls Emily ad she is panicking, she tells her that “A” is following her. Emily tells her to steal the pictures. Emily takes Sara to meet Caleb so he can help her with the emancipation application. Caleb offers her a job working for his web design company so that the judge knows that she can support herself.

Hanna heads back to the brew and sees Leslie again, she apologizes for shouting at them earlier but she says that she will probably never forgive Radley. Leslie confesses that she thinks that Radley made Mona crazier and it didn’t help her. She warns Hanna to let the police ask the questions and stop snooping around Radley.

Dean gives Spencer a ride home from the AA meeting, When Spencer is heading in to her house she sees Mona outside of Alison’s house. Apparently, she wrote a letter to Alison and is putting it in her mailbox because Alison won’t take her calls. Spencer asks Mona if she thinks there was ever an 11 year old or 12 year old girl trapped in the doll house, she tells her about the room full of bath tubs. Mona says that the room wasn’t in the doll house, she never saw it there. Mona tells Spencer that she thinks it was all in her head.

Spencer and Hanna head to Radley, it’s empty and abandoned. Mona was supposed to come with them to help them snoop around but her mom wouldn’t let her out of the house. They head down to the basement and Spencer begins having flashbacks, the creepy bathtub room from her nightmare is in Radley’s basement! Meanwhile, Emily picks Sara up from the courthouse where she just filed the papers to get emancipated – they decide to go to the tattoo parlor to celebrate. Sara convinces her to get a tiny tattoo somewhere her mother will never see it. Emily settles on the Japanese symbol for courage.

At Radley Spencer and Hanna fid an old file on Charles DiLaurentis – it is a work order for the courier that transported his organ, he donated his liver and other organs. Hanna still thinks that Charles might be alive. They drop one of the papers in the bathtub and freak out when they see a body in the water – but it is just a CPR doll.

Aria stole Clark’s negatives and blows them up on the computer, she finds a picture of A’s shadow and zooms in. You can’t see “A”s face, but it is obvious that “A” is a girl. Aria sends out a text to the other liars and tells them that the “A” in the pictures has boobs!

Alison sneaks out to see Lorenzo, she apologies to him for the way her dad was acting earlier. Lorenzo isn’t mad, he understands that Alison’s dad is just frustrated. He tells her that he got a new cop to watch her house named Lydia, and says that she is nice. Lorenzo leans in for a kiss, and then Alison’s dad pulls up to the house. He gets out of his car and is obviously not happy to see Alison making out with the police.

At the tattoo parlor Sara sees Emily’s text message from Aria saying that “A” is a girl. She starts freaking out and tells Emily that she has seen “A” too. Sara saw someone in a black hoodie following them on the way to Caleb’s house, she panics and starts running down the street, Emily chases after her. Emily finally catches up to her – Sara is mad that Emily has been hiding “A” from her. Emily explains that “A” threatened to hurt her if they told Sara the truth. While they are arguing in the dark street they see the shadow of someone in a hoodie walking towards them, they make a run for it.