Rihanna Pregnant After Drake’s Announcement: Little Drizzy On The Way? 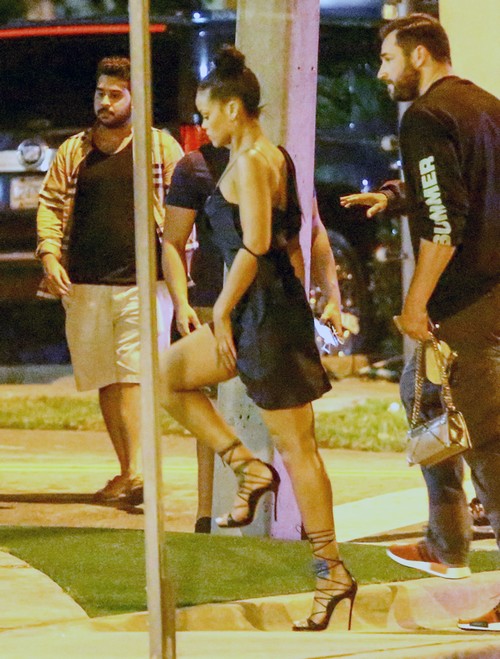 Could Rihanna be pregnant with Drake’s baby? There is an awful lot of baby talk when it comes to newly confirmed couple, Rihanna and Drake. In recent months the couple have really taken their relationship to the next level with Drake happy to tell the world how much he loves Rihanna. He has also expressed an interest in having a baby!

The two shared one steamy kiss at Drake’s Summer Sixteen performance in Miami on Wednesday night following Drake’s very sweet and public declaration of love for the Only Girl in the World singer at last weekend’s VMAs.

Drake and Rihanna have been inseparable ever since. The two have been seen out and about in their free time, holding hands and showcasing some serious PDA. Drake is clearly infatuated with Rihanna, who seems equally interested in him. It looks like the Battleship actress is finally ready to show the world how serious the two are after her very public relationship with Chris Brown which ended badly.

It appears that Rihanna feels comfortable publicly moving forward with her on and off again fling, Drake. The two have been connected romantically since 2009. It wasn’t until this year that the two have escalated their romance to hot and heavy, making surprise appearances at one another’s shows and flying all over the globe to be with one another.

There was also Drake’s announcement that he wanted to get Rihanna pregnant early this month. The Hotline Bling singer told a packed audience at the OVO Fest in Toronto in early August that he wanted to go “half on a baby” with the 28-year-old, who showed up to perform with her man.

The two have also reportedly talked about how cute their offspring would be if they were to have children. Who knows how long the couple have been together behind the scenes, but now that they are official and crazy in love with one another, it looks like a baby is a given. Unless Rihanna is already pregnant? Are waiting to share the news when the time is right? Maybe there is a little Drizzy on the way!

Rihanna and Drake are spotted enjoying a late night out at E11EVEN nightclub in Miami, Florida on September 1, 2016. The happy new couple are spending time together during Drake’s two-night concert stop in Miami by FameFlynet.