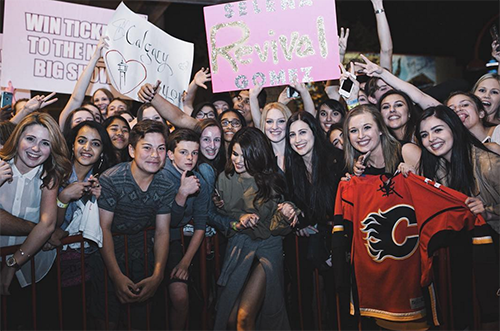 Following a Justin Bieber rant on Instagram, Selena Gomez will start refusing photo requests if fans don’t behave. Selena is fearful for fans safety, not her own, according to her message. At least Selena was nice about it though. Justin is starting to feel like a sideshow attraction when he is out in public. Justin’s exact words were, “I feel like a zoo animal.”

Fans have been put on notice – when he’s out in public, Justin won’t take a picture with you just because you bought an album. Justin KNOWS you bought his album, whichever one, but, “You got what you paid for AN ALBUM. It doesn’t say in the fine print whenever you see me you also get a photo,” Justin wrote.

Selena has also put up a notice on Instagram regarding fan requests for photos. It may have nothing to do with Justin’s rant since Selena’s post appears a week after Justin’s. Following a Revival tour stop on Tuesday, May 17 Selena wrote, “Calgary, Canada ALSO: meeting you guys after my shows has been such a highlight.. but because your safety is priority and most important if we can’t keep them contained I’ll have to stop. I’ll do it for as long as I can, but you matter most. Love you guys. Can’t wait to see you Saskatoon.”

Because fans push and shove each other to the point of nearly trampling someone, Selena’s fear for fans’ safety is justified. But Selena must be a bit fearful for her own safety as well. Just look at the photo of Selena being mobbed by the Revival tour attendees in Calgary! The girl looks as if she was nearly smooshed.

There’s also another message from Selena to fans. Selena Gomez and Justin Bieber are no more. Selena made that point very clear during a concert in Fresno, California, when she saw a fan with a ‘Marry Justin’ sign in the audience.

The singer motioned the fan up to the stage, took the sign, crumbled it, and angrily threw it to the ground. This was all posted on Instagram by someone who goes by the name Selena Gomez Source. Not only did this person post the short video clip, the person posted the sign which had been unrumpled by whoever found it.

Now, you have it from Selena directly. Behave when you’re asking for photos after concerts or there will be no more of that. And do not bring any signs to Selena Gomez concerts that reference Justin Bieber in any way, shape, or form.