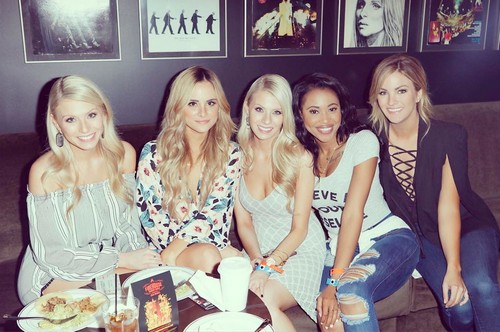 The Bachelor 2016 spoilers tease that the always entertaining ‘Women Tell All’ episode of Season 20 will air on ABC on Monday, March 7. All of the women that Ben Higgins sent packing will join Chris Harrison on stage to discuss their stints on The Bachelor, how they feel about Ben now, and get a chance to confront the man that dumped them on national television. Drama is sure to ensue.

According to The Bachelor 2016 spoilers, the final two contestants Jojo Fletcher and Lauren Bushnell will not be included in the special episode – but the most recently eliminated girl, Caila Quinn, will be. And, she will be joined by some of the fan favorites like Amanda Stanton – and the woman we all love to hate Olivia Caridi.

Leah Block also stirred up quite a bit of drama on this season of The Bachelor – and she will be present, as well as Becca Tilley.

The ‘Women Tell All’ special was just filmed a week ago, so Bachelor blogger Reality Steve hasn’t had a chance to spoil it completely. But, the ladies posted a bunch of photos of themselves on social media posing together after they were done filming the show.

Of all the women, we are most interested in seeing what Amanda Stanton has to say to Ben Higgins – we can all agree that The Bachelor did the single mom of two dirty during hometown dates. After spending a day with Amanda’s daughters –playing on the beach, and even tucking them in to bed, and playing the perfect step-daddy role, he dumped her.

The Bachelor 2016 spoilers also confirm that Ben Higgins will appear on the show, and will most likely sound off on why he felt compelled to tell TWO women that he was in love with them, which has stirred up quite a bit of controversy. Ben Higgins went from the most loved Bachelor of all time – to the butt of a slew of polygamy jokes on social media.

So Bachelor fans, are you as excited as we are to see the ‘Women Tell All’ episode next week on ABC? Let us know what you think in the comments below and don’t forget to check CDL for all of you’re the Bachelor 2016 spoilers and news.

Step2’s is passionate about happy kids, moms, & families. Can’t commend them enough for bringing laughter and imagination into children’s lives. Thank you for sharing your wonderful Toy Factory with Ben & I! p.s. You can definitely count on me having a 🏠 2 Story Playhouse Cottage & Slide 🏠 like the one behind us, in my house one day