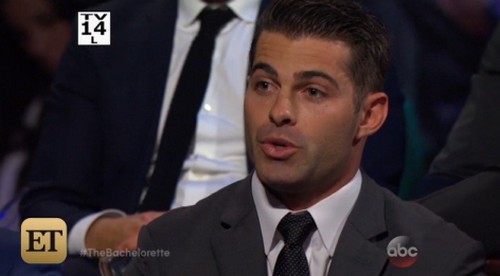 The Bachelorette 2016 spoilers tease that next week there will be not one, but TWO episodes of the reality TV show airing on ABC. On Monday July 25 Jojo Fletcher and her final three guys will head to Thailand for the overnight dates.

Then, on Tuesday July 26, the special “Men Tell All” episode will air, and we will get to catch up with all of Jojo’s exes, including the notorious Chad Johnson.

There was more drama between the guys on the show then there was with Jojo Fletcher, so it will definitely be interesting to see them all back on stage again.

Chad Johnson had some serious beef with Alex Woytkiw and Evan Bass, just to name a few. Plus, we’re pretty interested to see what Grant has to say about Chad hanging out with his ex-girlfriend after filming ended. The Bachelorette 2016 spoilers also tease that Derek will have some questions for Bachelorette Jojo Fletcher after she blindsided him and eliminated him on a 2-on-1 date with Chase McNary.

The Bachelorette 2016 spoilers tease that the next contestant to be eliminated in Season 12 will be fan favorite Luke Pell, he will also take the stage and get a chance to chat with Jojo. On last night’s episode we saw Luke make one last ditch attempt to profess his love to Jojo, but it looks like it was to no avail, because then she turned around and eliminated him.

Will Luke Pell be a bit disgruntled about getting dumped after such a vulnerable moment? Or will he handle it like a gentleman?

So Bachelorette fans, are you as excited as we are to watch the drama unfold on the Men Tell All episode? What kind of shenanigans do you think Chad Johnson will pull? Share your thoughts in the comments below and don’t forget to check CDL for all of your Bachelorette 2016 spoilers and news!