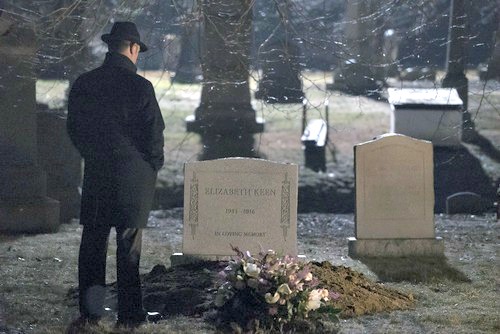 Is Elizabeth Keen really dead on The Blacklist Season 3, or was Megan Boone’s unexpected exit from the NBC drama just a hoax? The Blacklist fans are still buzzing about Liz Keen’s shocking death in Episode 18, after complications arose during the birth of her and Tom Keen’s daughter Agnes.

Liz seemed dead, Red sobbed over her lifeless body, Nik called a time of death, she was loaded in to a body bag, and spoilers tease that her funeral will be held during The Blacklist Season 3 Episode 20.

Megan Boone’s character Elizabeth Keene has been the center of The Blacklist since the show began on NBC, it’s a hard pill for fans to swallow if she really is dead. And, considering the fact that this isn’t the first time her death has been faked on the show – it’s not out of the realm of possibilities that this could be another fake.

Also, Megan Boone is pregnant in real life, so a fake death could be the perfect way to get her off the canvas for a few episodes for maternity leave  or even until next Season 4 of The Blacklist!

If Elizabeth is still alive, then who orchestrated her fake death? The first suspect would obviously be Raymond Reddington (James Spader). He seems to have the world at his fingertips and can pull off anything. Could he have slipped Liz some sort of drug that slowed her heart rate down enough to convince Nik she was dead?

His reaction to her death seemed so genuine though…could Red have even pulled off that great of acting?

Another popular Blacklist theory is that Mr. Kaplan (Susan Blommaert) is behind Elizabeth’s fake death. In the moments leading up to Liz’s demise, Kaplan became very emotional and even scolded Red and blamed the situation on him, blaming him for not keeping Elizabeth safe.

Kaplan is the one who brought in medical supplies, contracted Nik, and even took Liz’s body away. Is it possible Kaplan decided that Red was doing a horrible job protecting Liz and decided to take over? That would explain why Red was so emotional when Liz passed away – maybe he truly thought she was dead.

The third possibility is that Liz and Tom Keen (Ryan Eggold) recruited Nik to help her fake her death, in an attempt to get her out of danger. Liz was determined to protect her baby by any means necessary. Perhaps eliminating herself from Agnes’ life is the only way that Elizabeth could be certain the baby would be safe.

However, that third possibility seems less likely since spoilers indicate there will be a Blacklist spinoff and Tom Keen is leaving the NBC show too and going off on his own with baby Agnes.

What do you guys think, is Elizabeth Keen really dead? Did Megan Boone quit the show for good to be a mom in real life? Or will she return later in Season 3 or on The Blacklist Season 4? Share your thoughts in the comments below and don’t forget to check CDL for all of you’re the Blacklist spoilers and recaps.