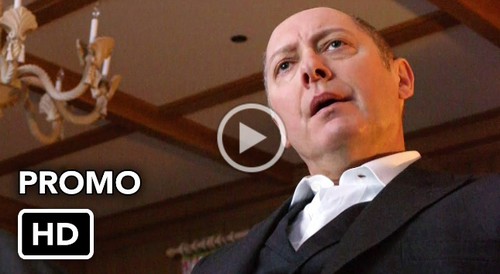 The Blacklist 2016 spoilers tease that Season 3 Episode 20, “The Artax Network,” will be airing on NBC on Thursday April 21. Spoilers indicated that last week’s episode of The Blacklist would leave fans shocked, but no one was prepared for Elizabeth Keen’s heartbreaking death and Megan Boone’s exit (although rumor has it she may be back).

The Blacklist Episode 20 will pick up where we left off after Liz’s death. An exclusive spoiler from Entertainment Weekly features a photo of Liz’s funeral. Her friends and family gather in a cemetery for the ceremony and a closed casket appears to be lowered in to the ground. Aram appears to be reading a eulogy while Ressler, Samar, and Harold look on.

Reddington is no where in sight, neither is Tom Keene. Of course, they may be at the funeral – and just weren’t shown in that photo. Of course the fact that Elizabeth Keen’s casket is closed has spurred more rumors that her death is a hoax and she is still alive – whether or not that is the case remains to be seen.

The Blacklist Season 3 spoilers tease that Episode 20 is called “The Artax Network.” You will remember last week that while the FBI was searching for one of Solomon’s men, they uncovered a complicated mess of wires in the basement of a house and realized that it was a hub where thousands of messages were being intercepted on the Eastern half of the country.

It looks like Ressler and his team will be following up on the network and trying to use it as a way to track down Solomon and whomever hired him to kidnap Megan Boone’s now deceased character Elizabeth Keen.

The Blacklist 2016 spoilers tease that James Spader’s fan will definitely not want to miss Episode 19, and Raymond Reddington will deliver some heartbreaking scenes. And, we might finally get a little more information about Red and Liz’s mysterious past.

The spoiler video for “The Artax Network” teases, “Red’s world is falling apart. But, what happens now every Blacklist fan has to see. Be there for the performance everyone will be talking apart.”

It looks like Tom Keen and Raymond Reddington are about to go head to head over baby Agnes following Liz’s death. Red states, “I would do anything to be a part of that child’s life.” But, Tom Keen is not having it, and announces that he is not going to let Red ruin the baby’s life like he did Elizabeth’s.

One thing is for sure – this will be one episode no one should miss. And, we might even get a clue or two in regards to whether or not Megan Boone’s character Elizabeth Keen is really dead!

So Blacklist fans, who do you think will win the battle over Agnes, Tom or Red? Do you have any theories about who hired Solomon? And, do you think Liz is really dead? Let us know what you think in the comments below and don’t forget to check CDL for all of you’re the Blacklist spoilers and recaps!