BY Heather Hughes on May 8, 2016 | Comments: 7 comments
Related : Soap Opera, Spoiler, Television, The Bold and the Beautiful 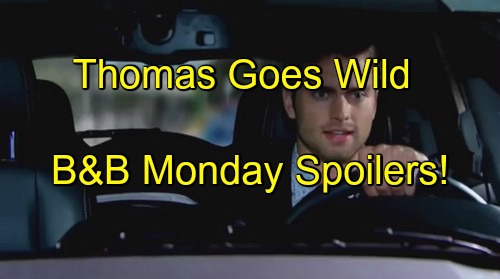 “The Bold and the Beautiful” spoilers for this week’s episode, Monday, May 9, tease that Bill (Don Diamont) will try to keep Steffy (Jacqueline MacInnes Wood) committed to Wyatt (Darin Brooks). Bill understands that Steffy is concerned about Liam (Scott Clifton), but he’ll insist that he shouldn’t be her top priority.

Bill will believe that Wyatt always has to come first for Steffy.

Steffy will realize that she needs to respect her marriage, but it’s going to be difficult to give Wyatt her whole heart. Part of it will belong to Liam forever. Meanwhile, Liam will be determined to win Steffy back at any cost. He’ll feel like he has to fight for the woman he loves. Liam will shout that it’s the only thing he can do.

Other “Bold and the Beautiful” spoilers say Katie (Heather Tom) will offer encouragement to Caroline (Linsey Godfrey). She’ll suggest that everything will work out like it’s supposed to. Telling Thomas (Pierson Fode) the truth about Douglas is for the best.

Katie will think Ridge (Thorsten Kaye), Caroline, Thomas and Douglas will all benefit from having everything out in the open. Unfortunately, Ridge’s attitude could get in the way of that blended family plan. Ridge just admitted that Douglas is Thomas’ son, but that doesn’t mean he intends on letting it change anything.

B&B spoilers indicate that Ridge will make a harsh declaration. He’ll growl that he’s not going to allow Thomas or anyone else to destroy his family with Caroline. Of course, Thomas was quite fond of Douglas when he only thought of him as a little brother.

How much more attached will Thomas be now that he knows Douglas is his own baby boy?

There’s a good chance a custody battle is brewing if Ridge can’t learn to compromise. Since Ridge is ridiculously stubborn, it sounds like they could soon be headed to court. It’s tough to believe that Ridge wouldn’t lose this war.

Thomas is the child’s biological father and there’s not much Ridge can do about it. Will Thomas fight for his son? Will he take rash action in the face of Ridge’s exclusionary stance? B&B spoilers for this week’s episodes tell us that Thomas will actually steal Douglas!

Stick with “The Bold and the Beautiful” for updates on the conflict ahead.

So B&B fans, what do you think about the news that Bill will urge Steffy to put Liam on the backburner? Will Steffy be able to do that? What about Ridge’s threats? Can he really keep Thomas away from his kid?