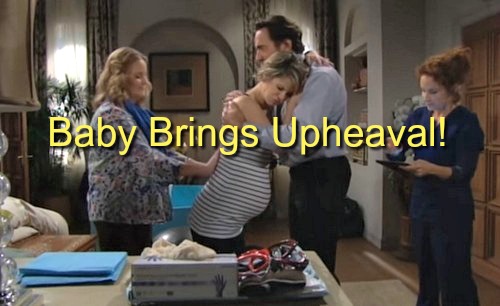 “The Bold and the Beautiful” spoilers tease that Caroline (Linsey Godfrey) and Ridge (Thorsten Kaye) will welcome their baby boy this week. They’ll be thrilled to meet their son and all their worries will disappear for a brief moment. Unfortunately, they’re letting their guard down at exactly the wrong time.

The Bold and the Beautiful spoilers tease that Ridge will announce the great news to all of his friends and family members during an episode this week. Everyone will congratulate the happy couple on their new addition.

However, Ridge won’t be interested in letting Thomas (Pierson Fode) around the newborn. B&B viewers know why Ridge is being protective, but Thomas will feel like Ridge is just holding a grudge due to their past confrontations.

When Ridge’s dismissive attitude becomes too much to bear, Thomas will call him on it. “The Bold and the Beautiful” spoilers say Thomas and Ridge will have another faceoff as they vent their frustrations. It seems their feud is kicking in high gear in preparation for the stunning reveal.

Ridge and Caroline’s secret is set to blow in an episode this week. Once Rick (Jacob Young) gets updates on Ridge’s vasectomy, he’ll quickly realize he’s in the prime position to destroy his brother. Rick has reached his limit when it comes to dealing with this sibling rivalry. He’s ready to make Ridge pay and this should do the trick.

Rick might decide to rub what he knows in Ridge’s face. It would be fun for Rick to watch Ridge sweat a little. Nevertheless, it appears Rick won’t be sitting on this secret for very long. He’ll want to make sure he takes full advantage of Ridge’s misfortune.

Thomas’ head will spin once he learns Ridge and Caroline have been deceiving him about something so huge. Ridge will undoubtedly argue that Thomas isn’t man enough to be a father. Of course, the circumstances surrounding the conception will also come into play. Thomas will likely express remorse for how everything went down, but he’ll still think he deserved to hear the truth.

Ultimately, we’re going to have a whole lot of hostility on the CBS soap. Ridge will be livid at Rick for blabbing and furious at Thomas for impregnating Caroline. Thomas will be angry over Caroline’s lies and enraged at Ridge for keeping him out of the loop on his own baby.

As for Caroline, she’ll be stuck in the middle of this giant Forrester war. Will there ever be peace for this family? Right now, things aren’t looking good. Stick with “The Bold and the Beautiful” to watch the epic fallout.

So B&B spoilers fans, what do you think about the renewed conflict between Ridge and Thomas? Will Rick drop the bomb soon? Will Thomas insist on raising this child as his own? Voice your opinion in the comments below and don’t forget to check CDL often for the latest “Bold and the Beautiful” spoilers, updates and news.