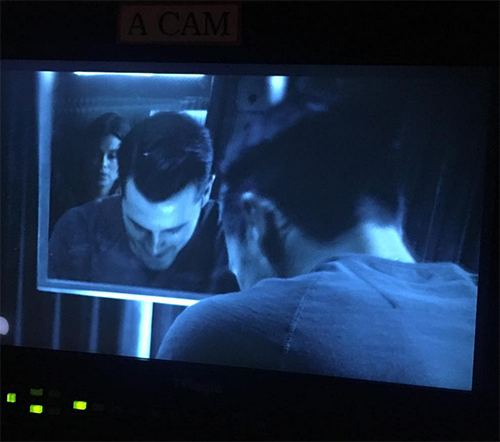 Nina Dobrev has been working non-stop filming movies for the big screen, but there’s always hope the actress will return for the series finale of The Vampire Diaries. If Nina does agree to come back could there be a reunion between Elena and Stefan [Paul Wesley] instead of Elena and Damon [Ian Somerhalder]?

Paul is directing again for season 8 of The Vampire Diaries. The actor recently shared a photo on Instagram. “Directing. Day 5,” the actor simply stated. Look closely at the photo. Who is the female in the background? The photo is in black and white and a little fuzzy, but the woman does look like Nina.

If an Elena and Stefan reunion is in the cards, then Damon could and probably will be reduced to a minor character. Stefan and Elena loved each other once, why not reunite the vampires for the series finale of TVD? Putting Stefan and Elena back on the romance track might even lead to a fantastic crossover to the other CW vampire show The Originals, a spinoff of TVD.

Paul Wesley has been silent regarding executive producer Julie Plec pleading with Nina to reprise her role as Elena for the series finale of The Vampire Diaries. Somerhalder, on the other hand, has been very vocal about NOT wanting Nina back.

How infuriating would it be for Ian Somerhalder to be put on the back burner simply because the actor didn’t want to shoot love scenes with ex-girlfriend Nina Dobrev? Did Paul Wesley and Julie Plec put their collective heads together and make an agreement with Nina that, if she returned, it would be a Stefan and Elena reunion and Damon would be left out in the cold?

Would fans accept Elena and Stefan back together? TVD fans have been clamoring for a Delena reunion since Nina left The Vampire Diaries after season 6. Ian Somerhalder’s refusal to work with Nina Dobrev obviously would make any kiss and make up between Elena and Damon impossible.

But Stefan and Elena back together again would prove for an interesting TVD series finale. Making Damon a minor character would prove to be Nina Dobrev’s ultimate revenge on Ian Somerhalder, don’t you think?