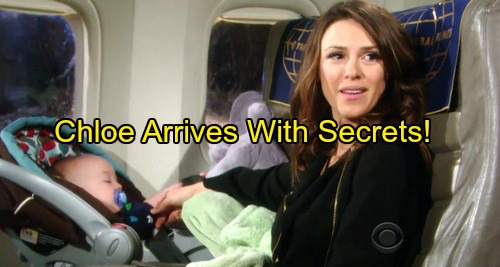 The Young and the Restless (Y&R) spoilers tease that the chaos of the hostage situation will die down. That means we’ll have to get back to the business of Adam’s (Justin Hartley) court case. In light of the crazy circumstances, it looks like we may be headed for a mistrial.

Michael (Christian LeBlanc) will at least get a bit more time to prepare. Dylan (Steve Burton) believes that Adam may have helped Ian (Ray Wise) escape. Victor (Eric Braeden) also suggested that the family should blame Adam for the whole ordeal. Adam is obviously in deep trouble.

Nevertheless, Adam isn’t a quitter. That’s one good quality he got from his old man. Adam’s stubbornness often comes in handy when he ends up in scenarios like this. He’s not about to give up.

Chelsea (Melissa Claire Egan) has the same determined spirit and she’ll intend on making the most of the extra prep time. When Adam goes to trial again, Chelsea will want Michael to have all of the facts. They have to bring their A-game.

The Young and the Restless spoilers say Chelsea will check in with Kevin (Greg Rikaart) to see how the research is coming along. She realizes they desperately need to find Victor’s accomplice. Vic sold his story on the stand, but Chelsea knows it’s bogus. Y&R viewers know that, too.

We watched Victor meet with his secret partner and it’s clear that they were trying to frame Adam. Chelsea will be convinced that this mystery woman can solve their problems. She’ll beg Kevin to use his sleuthing skills and crack the case. Adam’s freedom depends on it.

Kevin will kick his efforts up a notch, but he doesn’t have a lot to go on. Fortunately, The Young and the Restless spoilers reveal that Victor’s accomplice will soon pop up in Genoa City. Is this the long-awaited Chloe (Elizabeth Hendrickson) return we’ve been hearing about? It sounds like a safe bet!

Once Chloe is back in town, will Kevin put it all together? He might even figure it out beforehand. Kevin could be the reason Chloe comes out of hiding. It seems this mystery has a few extra layers. We’ll tack on one more secret when everyone learns Chloe has a young daughter.

Does this little girl belong to Kevin or Billy (Jason Thompson)? Chloe had sex with Kevin and then stole Billy’s sperm sample before she bid GC farewell. She wanted a daughter with Billy to replace Delia (Sophie Pollono). That’s precisely why Kevin would be a good choice for the “baby daddy.”

When do Y&R characters ever get what they want?

Sage (Kelly Sullivan) hoped Christian would be Nick’s (Joshua Morrow) child. Was he? No way! Christian (aka Sully) belongs to Adam. Likewise, Chloe’s plan could have been thrown off course. Perhaps Chloe didn’t have had a chance to Billy’s sperm. She could’ve learned she was already pregnant with Kevin’s baby.

Plus, Kevin is heavily involved in the quest to find Chloe. It makes sense that he’d stumble across his own toddler at the end of this arc. We shouldn’t rule out Billy, but he might have enough on his plate right now.

Billy’s affair with Phyllis (Gina Tognoni) is set to explode in the near future. That might be all of the drama Billy can handle at the moment. Regardless, big changes are coming for someone.

We’ll give you updates as additional news surfaces. Stay tuned and don’t forget to check CDL often for the latest Young and the Restless spoilers, updates and news.