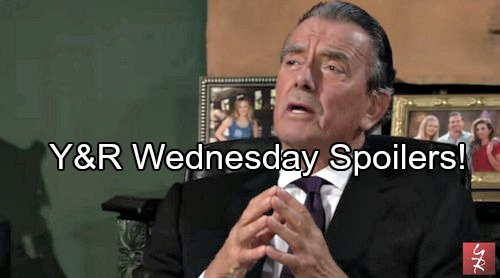 The Young and the Restless (Y&R) spoilers for Wednesday, August 3, tease that Sharon (Sharon Case) and Mariah (Camryn Grimes) will try to get through their camping adventure. Dylan (Steve Burton) will be bummed that they’re not really enjoying it, but he’ll understand. Sharon and Mariah will try to feign enough excitement to finish off their experience in the great outdoors.

As they sit around the campfire, Faith (Alyvia Alyn Lind) will want to hear a ghost story. She’ll suggest one about a baby snatcher. Sharon will look worried until Faith explains that she’s referring to Sheila Carter (Kimberlin Brown).

Meanwhile, Victor (Eric Braeden) will instruct someone to retrace Luca’s (Miles Gaston Villanueva) steps and find out if he was behind the oil crisis. After speaking with Chelsea, Nick (Joshua Morrow) will do his best to get to the bottom of Victor’s actions. He’ll ask if Victor is the reason Adam is stuck in prison.

Before they can really discuss anything, Summer (Hunter King) will walk in. She’ll declare that she’s returning to Newman Enterprises. Luca convinced Summer that it was the right move, but she won’t want Nick to misunderstand his motives. Summer will suggest that Luca just wants what’s best for her.

While Victor and Nick spar, Luca will join Summer in her office. She’ll confess that she’s late and Luca will ask if she’s pregnant. Just outside the door, a concerned Nick will eavesdrop. Elsewhere, Kevin (Greg Rikaart) will read the results of the DNA test. They’ll indicate that Kevin isn’t Bella’s (Cali May Kinder) dad.

Kevin will urge Chloe (Elizabeth Hendrickson) to let him be Bella’s father figure anyway. The actual results won’t matter to him. When Kevin asks Chloe to move in, she’ll refuse to play house. Chloe will insist that Kevin should just go knock up Natalie (Mara McCaffray) if he wants to be a dad so much.

At Crimson Lights, Y&R spoilers say Kevin will mull over what happened after the paternity test. He’ll tell Michael (Christian LeBlanc) that he just can’t get Chloe out of his head. When Natalie arrives, she’ll get the news that Bella isn’t Kevin’s kid. Kevin will suddenly break things off with Natalie and she’ll storm out.

At the state pen, Chelsea will inform Adam that she’s not sure his theory is correct. She won’t think Chloe is working with Victor. Adam will reply that Chloe is simply playing Chelsea. He’ll want to speak with Chloe himself so he can be the judge.

The Young and the Restless spoilers reveal that Chelsea will meet up with Chloe at home. She’ll suggest that Adam would probably like to hear that he’s forgiven in person. Once Chloe is gone, Chelsea will search her bag and find grief recovery books. She’ll guess that Chloe really isn’t out for revenge.

Back at Walworth, Chloe will offer her sympathy to Adam. He’ll want her to drop the charade, but Chloe will maintain that she forgives him. She’ll tearfully admit that she had to stop concentrating on Delia’s (Sophia Pollono) death.

Adam will hint that he’d never forgive anyone who tried to keep Connor (Gunner and Ryder Gadbois) out of his life. They’ll both agree that this has been a beneficial visit. A smug smile will appear on Chloe’s face as she leaves.

Chloe certainly fooled Chelsea, but Adam may not be convinced. Will Chloe eventually slip up? How will everyone learn the truth? Stick with the CBS soap for updates on the rest of this hot plot.