‘The Young and the Restless’ Spoilers: Explosive Revenge Week – Punches, Payback and Day of Reckoning 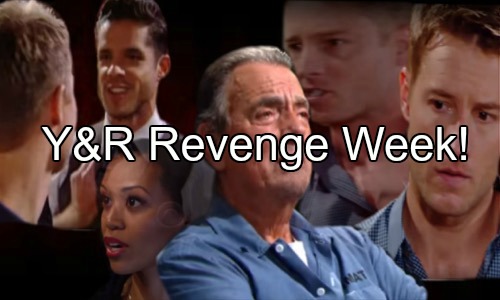 The Young and the Restless (Y&R) spoilers for the week of June 20-24 tease that revenge will be on the minds of several Genoa City residents. First, we have the king of vengeance himself: Victor Newman (Eric Braeden). Victor has been sending his female minion out to pull off this setup.

There’s a good chance Chloe (Elizabeth Hendrickson) is one we keep catching glimpses of.

Victor will insist that they can put the final nail in Adam’s (Justin Hartley) coffin. All of their hard work is about to pay off. After Victor’s partner plants the last piece of evidence, Adam’s fate may be sealed.

He’ll fly into a rage when the police arrive with updates on the latest proof against him.

Elsewhere, the blackmail gang will realize their situation is a ticking time bomb. Jack (Peter Bergman) now knows that Neil (Kristoff St. John) kidnapped Hilary (Mishael Morgan). That means Jack also knows about the cover-up that’s been going on since then.

Ashley (Eileen Davidson) will hope that Jack will keep his mouth shut, but that may not be something he’s willing to do.

The Young and the Restless spoilers say Jack will be furious that Neil’s actions have snowballed into this mess. He’ll be stunned that no one had the guts to call the cops. Jack will wonder if Ashley really expects him to look the other way. Crimes have been committed and something needs to be done.

Meanwhile, Devon (Bryton James) will warn Lily (Christel Khalil) that they may be doomed. He’ll suggest that they could all be going to jail. Dr. Neville (Michael E. Knight) has probably already accepted that fact. He’s in far too deep.

Charges could be coming for everybody, especially now that Jack is in the loop. It seems opening up has unleashed something in Hilary. She may be willing to let every last one of them go down. Y&R spoilers indicate that Hilary will vow that they’re going to pay the price.

Neil will announce that the day of reckoning has finally arrived.

Across town, we’ll see a brawl at Hank’s bar. It looks like Luca (Miles Gaston Villanueva) will push Travis (Michael Roark) too far. Luca has had it out for Travis from day one. He’ll likely continue to rock the boat when it comes to Travis and Victoria’s (Amelia Heinle) romance.

Luca may not know who he’s messing with. Y&R’s latest promo shows Travis knocking Luca into next week. Luca is sure to have a shiner after a punch with that much power! Will this just make Luca even more determined to make trouble for Travis?

Stick with The Young and the Restless to see what else Luca has up his sleeve.

So Y&R fans, what do you think about the news that Victor will make one last move to defeat Adam? Will Hilary let her crew crash and burn? Will Luca make Travis regret that blow to his face and his ego?