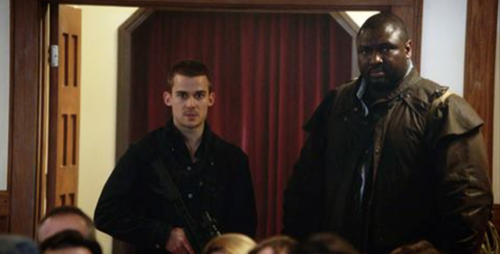 Tonight on CBS Zoo continues with an all new Tuesday, August 2, season 2 episode 7 called, “Jamie’s Got a Gun” and we have your weekly Zoo recap below! On tonight’s episode, Mitch (Billy Burke) explores Jackson’s (James Wolk) past in an attempt to get the answers they need to make a cure.

On the last episode, the team visited Portugal where they battle a dangerous venom dealer in hopes of getting one step closer to the cure. Meanwhile, Jackson’s erratic behavior put everyone in jeopardy. Did you watch the last episode? We’ve got your detailed Zoo recap right here.

On tonight’s episode as per the CBS synopsis, “Mitch explores Jackson’s past in an attempt to get the answers they need to make a cure; at the same time, the rest of the team search for evidence related to the triple helix inside a charming English town.”

This is definitely one series that you don’t want to miss our Zoo recap. Don’t forget to stay tuned to Celeb Dirty Laundry where we will be updating our live Zoo Recap down below!

Mitch had a working theory about the “Ghost Gene”. He apparently believed that a pseudo scientist by the name of Lenard Pierce had accidentally invented the triple helix back in the 1800s so he thought that there was a chance that everyone and everything that now had the “Ghost Gene” was a direct descendent of the animals and people that Pierce once x-rayed as part of his carney act. So Mitch had gone out and tried to prove this theory, but there was just this one thing that wasn’t matching up and it was Jackson. Jackson didn’t have an ancestor that had foolishly taken part in Pierce’s carnival side show and so Mitch had no way of proving how Jackson got the triple helix.

However, Mitch didn’t want to give up on his theory even if it wasn’t adding up so he kept on looking into it and was in the middle of checking Jackson’s full family tree when Jackson began acting strangely. Jackson had unfortunately had an episode where he entered a fugue state and had no idea what he was doing or that his wanting to suddenly bury Chloe was out of place because they had already sent Chloe’s body back to France. So he hadn’t come to until Abe was able to return him to reason and he found himself in the middle of a field trying to bury a body that wasn’t there. And so Jackson’s condition was slowly worsening, but it turns out that he had said something in his fugue state that was important.

Jackson had uttered the same sentence over and over again. So everyone else had dismissed it yet Mitch had realized that Jackson was repeating anagram that was part of a gene sequence. The same gene sequence that he was looking for because it could help find the cure and finally stop the global epidemic. But Jackson hadn’t even remembered what he said so the only way that Mitch was going to be able to get the rest was for him to put Jackson under. Mitch had later given Jackson a certain drug that would help connect to his subconscious so that had made Jackson remember his father. And the last time they had seen each other.

Jackson’s father Robert Oz had been a professor that believed the animal would one day take over the planet. So he had been the laughing stock of the entire scientific community although with everything that’s been happening it seems that Robert had been right all along and that he was even working on the gene sequence when he was still Jackson’s mother. That is before she left him and took Jackson with her. Yet, Jackson’s memories of his dad weren’t pleasant. His father was erratic and could often be volatile if anything were to interfere with his work so there had been a part of Jackson’s memory that he had been repressing. And he would have continued to repress it if it hadn’t been for Mitch.

Mitch had had control over the plane because Alison had to settle some type of business. So Mitch had split up the group and had sent everyone off the plane for a mission while he took Jackson down memory lane. Mitch had sent the guys to check through Pierce’s belongings in England because Pierce had apparently abandoned his sideshow and had completely given up his work after he began noticing something wrong with his animals. But Pierce’s once quiet English town was now a different place and so the team that Mitch sent out had soon found themselves in danger.

The team that consisted of Logan, Abraham, Dariela, and a new pessimistic Jamie had found out that the once quiet English village had found themselves constantly under attack. It seems the people there hadn’t been to sleep in weeks because of the animals. There would cicadas that made this awful sound that drove everyone to hide indoors, but that sound would act as a dinner bell that would alert the other animals that it was time to feed. So bears, panthers, and every other weird animal would descend on the town and begin feeding on the villagers. Who unfortunately stuck there because of circumstances.

Some of the villagers had apparently tried to leave yet the return of the cicadas would again stir up a frenzy that meant no one was able to get very far. So Dariela had ultimately decided to do something to help the villagers. She called a few people and had found out that if she could get them just a few miles down the road that they would receive help. However, Dariela didn’t want the villagers to have to fend for herself and she wasn’t willing to accept Logan’s help because she knew that this was something she had to do. And that she wanted to prove to herself that she could choose life over what was on that plane with Jackson.

So Dariela had talked to Abraham and she had told him that she was going back. She had explained that Jackson had asked her to kill him when he lost control and that she didn’t want to be something that was only good at death. Though while the team ended up losing Dariela who admittedly been their muscle thus far, they still had Logan because Dariela had told him that she knew about his feelings for Jamie. Feelings that he eventually owned up to after Dariela had confronted him about them so Logan had pretty much made it that he was staying with the team for Jamie.

Jamie on the other hand, was focusing on their mission and was even doubting faith all together when an accident helped her and Abraham find Pierce’s research. Jamie and the village priest had been going back and forth over divine intervention when she knocked over a box that had Pierce’s information in it. Unfortunately, there wasn’t much because the villagers had said that Reiden Global had sent men in a few days earlier and they had cleared out Pierce’s old house. So the only thing that had been in the box was information that Pierce had come back to England to bury his brother. Which was odd because Pierce had been an only child.

Yet, Abraham and the priest had jumped on that information was because Pierce must have lied about his brother in order to bury his research in a fake grave. So the guys had gone over to the graveyard where they then collected everything they found under the George Pierce maker and so the priest had said that it was almost a shame that the professor with Reiden hadn’t thought of the searching the grave. He said that Professor Oz would probably be kicking himself if he ever found out that he had come so close to finding what Pierce had been hiding. And, well, the priest saying that had confused both Jamie and Abraham because they thought Robert Oz was dead.

Only to find out Robert wasn’t dead and that he was working with Reiden was apparently too much for them. So they decided that it would best not to tell Jackson until they at least got definitive proof. But in a strange twist, Jackson probably wouldn’t want to see his father even if he did find out the other man was still alive. Jackson has been remembering everything that he’s repressed so he remembered burning down his father’s lab and office because he thought his father would be normal again if he forgot about the animals. And in retaliation and possibly out of spite, Jackson remembered his father injecting with something the last time he had seen him.

So Mitch ended up figuring out how Jackson got the triple helix when he realized that the professor must have been to duplicate the third helix and inject into Jackson.

And so everything that Jackson was now going through was because of his father. However, his father wanted to see him again before he did anything else for Reiden or the General. So Logan who was secretly acting as Reiden’s mole had called in and had told the general that they didn’t have to worry about Dariela anymore. He said that she was gone and that Jackson was still on the plane. Practically defenseless!