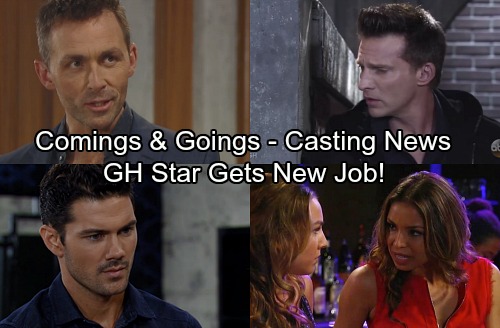 General Hospital (GH) spoilers and casting news for the week of October 23-27 tease that there’s some comings and goings news to pass along. For starters, you might be wondering about Sonny’s new bodyguard. Patient Six (Steve Burton) recently had an intense encounter with Troy, who’s played by Matthew Jayson.

Thankfully, Burton’s character was able to figure out that Troy worked for Sonny. He didn’t want to hurt the guy, so he just took off. If Troy happens to spot a picture of classic Jason later, that might be an interesting development.

However, GH will probably leave the heavy lifting to the major players. Jason (Billy Miller), Sam, (Kelly Monaco), Franco (Roger Howarth), Liz (Rebecca Herbst) and Sonny will should be the most involved in this storyline. General Hospital spoilers hint that some serious shockers are coming up in Port Charles.

Looking ahead a bit, West Liang will appear as a character named Cliff on November 2. It’s not clear what Cliff will be up to, but we know Valentin (James Patrick Stuart) will bump into a face from his past that day. Cliff might have a connection to Valentin or he could stir up trouble for another PC resident.

Liang has also appeared in an episode of Mistresses and can be seen as a detective on Ten Days in the Valley. Speaking of detectives, it looks like Nathan (Ryan Paevey) could be hard at work on case soon. Naturally, he’ll need some help. Michael Scovotti will play Officer Jones on November 2, so maybe this cop will provide updates on some crucial details.

Kristina (Lexi Ainsworth) recently headed off canvas with Parker (Ashley Jones), but that doesn’t mean you can’t catch Ainsworth elsewhere. She scored an impressive arc on TNT’s Major Crimes. Ainsworth tweeted, “Excited to be a part of @majorcrimestv for a few episodes.” She added that she had a fun experience filming the exciting drama.

Let’s hope Ainsworth and her character return to Port Charles sooner or later. Many GH fan are already missing Kristina! We’ll keep you posted as other General Hospital info comes in. Stay tuned to the ABC soap and don’t forget to check CDL often for the latest General Hospital spoilers, updates and news.