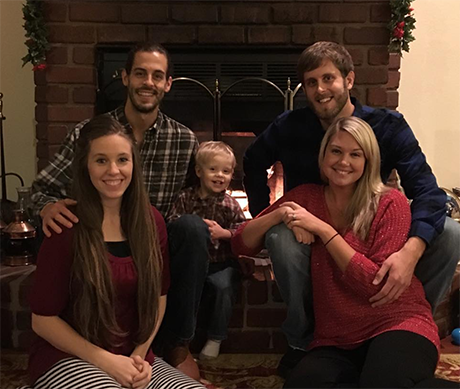 It looks as though the truth is finally coming out about Derick Dillard’s mystery illness. In fact, Jill Duggar’s husband reveals that there is definitely something wrong going on with him in a new clip for the couple’s spin-off show, ‘Counting On: Jill and Jessa.’

Jill Duggar and Derick Dillard have been living in El Salvador for the past year as part of their missionary work. Many sources say that the couple left their home in the United States right after Josh Duggar’s sex scandals rocked the Duggar family back in 2015. Jill and Derick didn’t want to be involved in any of the nasty media reports and that’s why they took their infant child Israel David and left for Central America.

But now that they are back home in Arkansas, things aren’t the same way they used to be. Fans think that Derick’s health might have taken a turn for the worst when the couple was living in their remote village in El Salvador. Jill and Derick didn’t have access to the same medical facilities that they have in Arkansas and that’s why they want to now get to the bottom of Derick’s mystery illness.

A new spoiler for ‘Counting On: Jill and Jessa’ reveals that Derick wants to talk to his doctor about the problems he’s been dealing with lately. He didn’t reveal any specifics, other than he feels great to be home again. Yet, in one clip, Derick can be seen trying to run on the side of the road before stopping and throwing up.

Jill and Derick’s fans have been worried about his health for over a year now. They’ve noticed the difference in his appearance and his weight. Some fans on social media even pointed out that Derick looks ‘scary skinny’ in his Instagram photos. Jill and Derick have not made any comments about his health.

Of course, the only two people that know the truth are Jill Duggar and Derick Dillard themselves. Whatever they are hiding, their fans know the truth will come out sooner rather than later.

Tell us, do you think Derick Dillard is hiding a secret about his health? Do you think something might have happened to him during the couple’s year-long stay in Central America? Let us know what you think by dropping us a line in our comments section below. Also, don’t forget to check back with CDL for all the latest news on Jill Duggar and Derick Dillard right here.